The launch in early 2003 of the Rosetta spacecraft of the European Space Agency (ESA), the 3rd "Cornerstone" mission of this organisation, will mark the beginning of an exciting scientific endeavour. Following two close passages by the Earth and another by Mars to gain speed, the complex 1.3-tonnes spacecraft will continue towards a rendez-vous with the icy nucleus of Comet Wirtanen [2], passing two asteroids on the way. Beginning in late 2011, at a time when the comet is close to its aphelion - the most distant point in its elongated orbit, about 770 million km from the Sun - the Rosetta "orbiter" will literally chase Comet Wirtanen for two years, sending back valuable data about the nucleus and its immediate environment. A "lander" will attach itself to this lump of frozen ice and dust, which is travelling through space at over 46,000 kilometres per hour, and analyse samples. A joint team from ESO and ESA's Space Science Department has proposed a short series of ground-based exploratory observations in support of this European space mission. Responding to the challenge, the second 8.2-m VLT telescope (KUEYEN), while undergoing commissioning at Paranal, has just performed a remarkable feat by observing the nucleus of Comet Wirtanen, now near its aphelion, i.e. at the location of the future Rosetta encounter. This is equivalent to viewing a pitch-black golfball, over 20,000 kilometres away!

In order to ensure the success of the Rosetta mission, it is obviously necessary to know as much as possible about the target in advance. How big is this nucleus and how much dust is likely to be present around it at the time of the encounter? In particular, how safe is it for Rosetta to approach and land on Comet Wirtanen?

For some years, astronomers have been attempting to answer these crucial questions. But until now, observations of Comet Wirtanen's nucleus have been rather difficult.

When the comet is near the Sun in its orbit and is brightest, the nucleus warms up. The ices on the surface evaporate (sublimate) and carry dust grains into surrounding space. A "coma" of dust and gas forms that soon becomes so opaque that the nucleus is completely hidden from view.

Contrarily, when the comet is far from the Sun, it is a very faint object that can only be observed with the largest telescopes. Moreover, its orbit is such that the comet is then always seen in front of the central regions of the Milky Way and its faint image thus moves across extremely "crowded" sky regions. It literally drowns in a sea of stars, rendering observations with Earth-based telescopes extremely difficult.

Comet Wirtanen is now approaching its farthest point in the orbit, the aphelion , and the coma is therefore expected to be thin, perhaps completely absent. It is thus a good time to attempt to observe the faint nucleus and to learn more about its properties.

For this reason, a series of exposures were made on May 17, 1999, with the VLT Test Camera attached at the Cassegrain focus of the second 8.2-m VLT Unit Telescope (KUEYEN). The telescope was set to track accurately the comet's motion - this went very well, demonstrating the excellent performance of the telescope optics, mechanics and control system, already at this early stage of the commissioning phase.

As expected, the faint image of the comet happens to be situated "on top of" background stellar images in many of the recorded frames. Still, twelve "clean" 8-min exposures were secured. The chosen exposure time is a well-considered compromise, long enough to ensure a reasonably well-exposed image of the faint comet, and yet sufficiently short to reduce the risk of it moving across other images in the field while the shutter is open.

Three of these images are shown, illustrating the comet's motion. The white lines are the trailed images of background stars in the field.

In order to improve the image quality, the twelve individual 8-min exposures were combined. The resulting image shows the faint object amongst the many star trails, demonstrating the difficulty of obtaining a well-exposed image of such a faint object in this crowded sky region. It is the first clear image ever obtained of the Rosetta target at this great distance, i.e. showing the nucleus as it will be when the encounter with the spacecraft takes place.

A team of ESO astronomers has performed a careful analysis of the new images. It leads to several important conclusions, of great value for the Rosetta planners.

Continued collaboration between ground and space

The present observations of Comet Wirtanen provide a fine example of a useful collaboration between ground- and space-based astronomical research facilities. More observations will be obtained with ESO's telescopes of this comet during the coming years, as well as of other spacecraft targets in support of future missions by European and other space agencies.

Video material about the new VLT observations of Comet Wirtanen

ESO Video News Reel No. 6 about these observations (in professional format with complete shot list) is now available for broadcasters.

[1] The present ESO PR material (text, photos, videos) is released in connection with the ESA Press Conference about Rosetta , on Thursday, July 1, 1999, at the Royal Society in London (UK).

[2] Comet Wirtanen was discovered in 1948 at the Lick Observatory (California, USA) by Carl A. Wirtanen . It is a socalled "Jupiter-type" comet, meaning that its orbit is strongly influenced by this planet. At the present time, the orbital period is about 5.45 years. The perihelion (the point in the orbit that is nearest the Sun) is at 159 million kilometres (1.06 AU) from the Sun, i.e. just outside the orbit of the Earth. The aphelion is at a distance of about 768 million km (5.13 AU), near the orbit of Jupiter. The inclination of the orbit (angle between the orbit of the comet and that of the Earth) is moderate, about 12°. 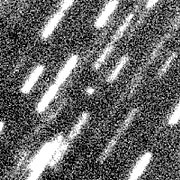