Working Day and Night at the Paranal Observatory

Much attention has been directed recently towards the spectacular first images obtained with the astronomical instruments now being tested at the first (UT1) of the four 8.2-m VLT Unit Telescopes at the ESO Paranal Observatory. There has indeed been a great interest in the newest, deep VLT views of the near and distant Universe by FORS1 in visual wavebands, as well as the first infrared glimpses into star-forming regions by ISAAC, available at the ESO website in different sizes and resolutions. Many of the original observational data will be placed in the VLT Archive in early 1999 and can then be accessed for scientific studies - an announcement will be made in due time.

At this moment, the FORS1 instrument at UT1 is in the second commissioning phase that will last another ten days.

Important progress is also reported from other work areas at Paranal and the assembly of the other three Unit Telescopes (UT2 - UT4) is proceeding in great strides.

The M1 mirror cell (still with a concrete dummy mirror) has been attached to the mechanical structure of UT2 and the encoders were installed at the elevation axis. This telescope will have "First Light" in late March 1999 when the first images will be obtained with the VLT Test Camera in Cassegrain focus. The mechanical structure of UT3 is being assembled and the heavy centerpiece is now in place. The fourth enclosure is ready and the supporting elements for UT4 have been installed.

In Europe, the third polished 8.2-m Zerodur mirror in its special transport box was loaded onto the vessel Scanscot Oceanic this morning in the harbour of Le Havre (France). Everything went smoothly and it is expected that the ship will arrive in Antofagasta towards the end of January 1999.

Future developments may be followed via the VLT Information webpage.

The following "diary" and the associated photos illustrate the progress of the assembly work during the past week.

Thursday, December 10, 1998: The large lifting platform is moved from its position outside the UT1 enclosure to outside the UT2 in preparation for the removal of the dummy M1 Cell on UT2. At the same time, the second M1 Cell with a dummy 8.2-m mirror of concrete is prepared for transport and lifted onto its handling tool, down in the Mirror Maintenance Building (MMB) at the basecamp.

Friday, December 11: This work continues with the removal of the dummy M1 Cell from the UT2 structure where it has been used to assemble and test the telescope. The encoder system that reads the positions of the azimuthal (vertical) and elevation (horizontal) axes is put in place. At UT3, the first large part of the heavy "centerpiece" that will later support the telescope tube is installed. With this step, UT3 begins to look like a "real telescope".

Saturday, December 12: The dummy M1 Cell is lifted from the transport carriage and placed outside the UT4 enclosure. It will later be used on this telescope. The transport carriage is taken down to the basecamp and the second M1 Cell with the concrete mirror is loaded on. The convoy moves back up the mountain to the UT2 enclosure and the M1 Cell is lifted inside. It is elevated towards the back of the lower telescope struts to check the fit.

Sunday, December 13: This day is spent checking and adjusting the fit of the M1 Cell to the back of the UT2 structure. Work continues on the encoder installation.

Monday, December 14: Adjustments of the bolted interfaces of the M1 Cell and UT2 continue and the optical alignment is checked. The cell is then lowered and the M3 tower on which the flat, tertiary mirror will be mounted, is installed. At UT3, the second part of the centerpiece is lifted and put in place. This is the most difficult operation during the entire telescope assembly sequence. It involves lowering the second piece of the centerpiece weighing over 50 tonnes into the bearing with a clearance of less than 1 millimetre.

Tuesday, December 15: The M1 Cell is raised again for the last time and bolted to the UT2. The balance of the telescope structure is then checked and adjusted before it is inclined with its M1 Cell in place for the first time. Meanwhile, the encoder reference tape is installed and checked. The measurements show it to be even better than that at UT1.

The following series of electronic photos was obtained during the operations described above. They were made for documentation purposes and have a limited resolution (1024 x 768 pix); some were taken under difficult illumination conditions. 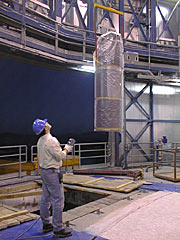 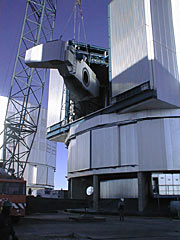 PR Image eso9862z
Construction work on the VLT UT4
Send us your comments!
Subscribe to receive news from ESO in your language
Accelerated by CDN77
Terms & Conditions