A VLT Snapshot of Jupiter

The "UT1 First Light" observations in May 1998 were done with the VLT Test Camera (TC) mounted at the Cassegrain focus of the first 8.2-m VLT Unit Telescope.

The TC was taken off the telescope in early September 1998 to allow mounting of the FORS1 instrument at this focus. In the second half of October, the TC was installed at Nasmyth Focus A of VLT UT1. Various test exposures were then made for optical alignment which also served to gain valuable experience in handling of the telescope in Nasmyth mode. This work led up to the installation of the ISAAC instrument at the Nasmyth Focus B in mid-November.

The image is a reproduction of an image of giant planet Jupiter obtained through a narrow optical filter with the VLT Test Camera at UT1 Nasmyth Focus A on October 31, 1998, at 02:06:01.0 UT in the morning. It looks somewhat different from most other published images because of the special passband. In terms of visible detail, it is probably one of the best Jupiter images ever obtained with a ground-based astronomical telescope. Just before the observation, Jupiter's large inner moon Io had begun to pass in front of Jupiter's disk (bright spot at the lower left). The bands in the atmosphere are well visible, also in this narrow-band image and the "Great Red Spot" is at the right edge in the main southern band. At this time, Jupiter was 636 million km from the Earth and the angular diameter was about 45 arcsec.

Technical Information : The image was obtained during a period of good seeing (0.4 arcsec). In view of the brightness of this planet (magnitude -2.7) and the enormous light-gathering capacity of the VLT UT1, the exposure had to be done through a narrow interference filter (H-alpha - centered at 6562 Å and FWHM 50 Å) and it lasted only 0.1 second. The disc of the planet is much darker at the edge than close to the centre which makes an image such as this hard to display. To avoid this problem, an unsharp-mask was applied and to enhance the contrast and sharpness of the surface detail the image was further processed using the Lucy-Richardson method. A bright circle to the right and some fainter ones in the same area are artifacts. North is up and East is left. 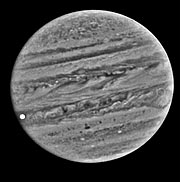 PR Image eso9859a
A VLT snapshot of Jupiter
Send us your comments!
Subscribe to receive news from ESO in your language
Accelerated by CDN77
Terms & Conditions