The ESO Very Large Telescope (VLT) is one of this year's winners of the coveted Best of What's New prize by the US Popular Science magazine.

The construction of the VLT was recognized as an "outstanding achievement" within the "Aviation and Space" category. It was described as the "Teamworking Telescope... an array of four large and three smaller telescopes, all working together to produce images equivalent in resolution to those that would be produced by a much bigger single telescope. The first of the seven telescopes... is already producing spectacular images..."

The award ceremony took place in New York on November 13, 1998. The VLT Project Manager, Professor Massimo Tarenghi, received a plaque on behalf of ESO and the VLT Team.

On this occasion, ESO put up a small exhibition that was visited by many of the participants in this ceremony. It was a good occasion for this organisation to inform US media and the technologically interested public about a major European science project.

More information about the VLT project is available at:
URL: http://www.eso.org/public/astronomy/teles-instr/paranal.html 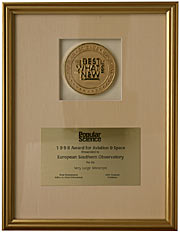