Final Tests of the VLT Main Telescope Structure in Milan

The main structure of the ESO Very Large Telescope (VLT) has been designed, produced and assembled by an Italian consortium composed of Ansaldo Energia (Genova), European Industrial Engineering (Venice) and SOIMI (Milan). A total of four identical structures have been built, one for each of the four VLT 8.2-m Unit Telescopes.

The first of these has been assembled and thoroughly tested in Milan, while the second is now being integrated at the Paranal site (for some recent images illustrating the rapid progress there. Additional information about the VLT structure is available in eso9518 that was published in connection with a visit by the members of the ESO Council to the Ansaldo Factory in Milan in December 1995.

The tests in Milan are carried out by a team of ESO engineers. They aim at optimizing ('fine-tuning') the control system of the telescope structure so that it will be able to track with superior precision the astronomical objects being observed (as the sky turns above the Paranal observatory). This will ensure the best possible (sharpest) images and also that the VLT can be exploited in the most efficient way.

During the past months, much valuable experience has been gained. As expected, the work in Milan has not been simple, but the problems encountered have all been effectively overcome. The current installation of Unit Telescope no. 1 (UT1) at Paranal profits greatly from this parallel operation and is now advancing rapidly.

The telescope structure moves around the azimuth and altitude axis by means of segmented motors that are directly coupled to the axes. They develop a peak torque of 125 and 72 kNm respectively. The residual torque disturbance, known as ripple and cogging and caused by the magnetic circuit finite distribution, has been kept smaller than 0.2 percent of the instantaneous torque by skewing the magnets and developing a special copper winding scheme. Again, this corresponds to an excellent performance of the system.

The rotational speed of the axes is measured by two segmented, directly coupled tachometers on each axis. The first tests have shown that a further optimisation of the phasing must be carried out in order to reduce somewhat the ripple of the speed measurements. 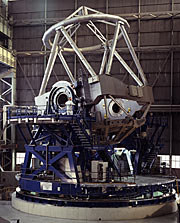