After having passed behind the Sun (as seen from the Earth), Comet Hale-Bopp is now again well visible to observers in the southern sky. Although this famous object is now three times farther away than when it passed its closest point to the Sun (the perihelion) on April 1, 1997, it is still quite bright, especially when compared to other comets that have been observed at the same distance. Its magnitude is now around 5, i.e. when seen in a dark sky it is just visible with the unaided eye. However, it is seen better through moderate-size binoculars and is of course still more interesting when observed with a large, professional telescope.

In the course of the continuing observational programme at the ESO La Silla Observatory in the Chilean Atacama desert, CCD frames of Comet Hale-Bopp were obtained on 1 October 1997 with the 2.2-m ESO/MPI telescope. These images show only the central part of the well developed cloud of gas and dust (the coma) around the cometary nucleus (the `dirty snowball' of ice and dust). The field of view is about 3 x 3 arcmin, corresponding to about 1/100th of the full moon area in the sky. At the present distance of the comet from the Earth, about 3.1 AU or 465 million km, this field corresponds to about 400,000 x 400,000 km. The coma of the comet is still much larger and extends far beyond the border of these images.

Two different filters were used during the exposures in order to discriminate between the gas and the dust in the coma. The photo obtained through an ultraviolet optical filter displays mainly the distribution of gaseous CN molecules in the coma, while that through a yellow-green (V) filter mostly indicates the distribution of dust grains. Since the telescope followed the motion of the comet during the exposures, the images of the stars in the field are not completely round, especially in the CN-image.

Using a special image enhancement processing technique it is further possible to isolate the jet and fan structures in the dust coma. This image shows at least 4 - possibly up to 6 - dust jets in the coma which are still being emitted from active regions on the surface of the nucleus of the comet.

The porcupine appearance of the multiple dust jets very much resembles the coma structures in Comet Hale-Bopp that were observed in the second half of 1996, for instance with the Danish 1.54-m telescope at La Silla. They may also be perceived as systematic irregularities in the isophote pattern of the V-filter image.

While it is therefore obvious that the dust is not at all evenly distributed throughout the coma, the gaseous coma is rather symmetric. This is most likely caused by an omni-directional expansion of the gas that is released by the nucleus.

The new images were obtained by Hermann Boehnhardt (ESO) and Francois Colas (Bureau des Longitudes, Paris, France) using the ESO/MPG 2.2m telescope equipped with the EFOSC2 instrument. They represent a small subset of the science data collected on comet Hale-Bopp during the past two weeks at ESO La Silla. On the photos that are shown here, the North and East directions are inclined 12 o clockwise of the top and left edge in the images, respectively.

They were among the last images obtained with the EFOSC2 instrument at the ESO/MPG 2.2m telescope. This multi-mode `workhorse' instrument will now be installed at the ESO 3.6-m telescope.

The first observations of Comet Hale-Bopp from La Silla after the perihelion passage earlier this year were obtained by means of the TIMMI instrument in the infrared spectral region.

Comprehensive and regularly updated information about Comet Hale-Bopp and links to many related websites is available at the ESO Hale-Bopp Homepage. 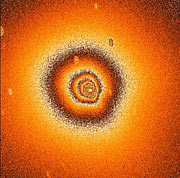 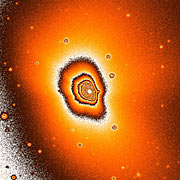 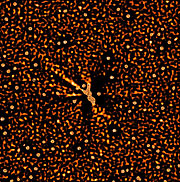