In this continuing series of views from the ESO Paranal Observatory, most have been related to developments around the VLT telescopes and their enclosures. While this assembly work is very important and now rapidly progresses towards the crucial moment of First Light, other activities are also going on which will ensure the proper functioning of the small, isolated community at Paranal, in the middle of the extreme Atacama desert.

One of the many tasks now underway is to improve the gravel road that leads to Paranal and on which all supplies are brought to the observatory. Anybody who has experienced the 130 km ride from Antofagasta to Paranal, especially the last stretch of road known as the Old Panamericana, would agree that the state of this `desert trail' is less than optimally suited for the safe transport of fragile goods, not to speak about the observatory staff!

Consequently, road work is now being carried out under an agreement between ESO, the Yolanda Mine (situated further to the south along that road) and the Direccion de Vialidad of the Chilean Ministerio de Obras Publicos (Public Works). Each partner is providing machinery, materials and people during an initial period of five months in order to improve significantly the condition of this important road. Yolanda and ESO provide assistance, but since it is a public road, the responsibility for this work rests with the Vialidad.

According to the Agreement, the improvements will be carried out between kms 15-33 and 45-72, as measured southwards from the junction between the `Old' and `New' Panamericana Road, some 60 kms south of Antofagasta. The improvements consist of grading, salt stabilizing and rolling. At this moment, a section of 23 kms has been completed, starting at the Paranal Observatory and moving back towards Antofagasta. Five more will be completed by the end of next week. This part of the road is now wide enough for two vehicles to pass each other easily and the surface is sufficiently good for driving speeds of up to about 90 km/hr to be maintained in safety.

The present series shows two images from the roads near Paranal as well as two views of the base camp site as it now presents itself after a lot of construction work. There is also one photo of the spider, now installed on the top of the mechanical structure of Unit Telescope 1. 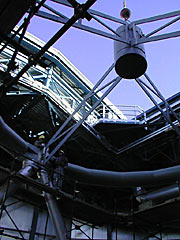