In the afternoon of March 9, 1997, the Bavarian Prime Minister, Dr. Edmund Stoiber, on the invitation of the Director General of ESO, Professor Riccardo Giacconi, visited the ESO La Silla Observatory, located in an isolated area in the Atacama desert some 600 km north of the Chilean capital.

The Bavarian Prime Minister, Dr. Edmund Stoiber, is currently visiting a number of countries in South America. He is accompanied by a high-ranking delegation of representatives of Bavarian politics and industry.

During this trip, the Bavarian delegation will visit the Republic of Chile, arriving in Santiago de Chile on Sunday, March 9, 1997. On the same day, Dr. Stoiber and most other members of the delegation, on the invitation of the Director General of ESO, Professor Riccardo Giacconi, will visit the ESO La Silla Observatory, located in an isolated area in the Atacama desert some 600 km north of the Chilean capital.

ESO, the European Organisation for Astronomy, with Headquarters in Garching near Munich in Bavaria, welcomes this opportunity to present its high-tech research facilities to Dr. Stoiber and leaders of the Bavarian industry.

During the visit, the delegation will learn about the various front-line research projects, now being carried out by astronomers from Germany and other ESO member countries with the large telescopes at La Silla. There will also be a presentation of the ESO VLT project, which will become the world's largest optical astronomical telescope, when it is ready a few years from now.

The delegation will be met by the Director of the La Silla Observatory, Dr. Jorge Melnick and his scientific-technical staff which includes several members of German nationality. Also present will be ESO's Head of Administration, Dr. Norbert König (Garching) and the General Manager of ESO in Chile, Mr. Daniel Hofstadt. 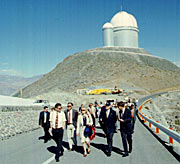 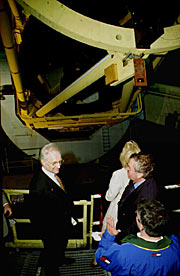 PR Image eso9705c
The Bavarian Prime Minister and Mrs. Karin Stoiber
Send us your comments!
Subscribe to receive news from ESO in your language
Accelerated by CDN77
Terms & Conditions