Hunting Mirages in The Southern Sky

One more cosmic mirage has been found with the ESO 3.5-metre New Technology Telescope (NTT). It consists of two images of the same quasar, seen very close to each other in the southern constellation of Hydra (The Water-Snake).

Ever since the exciting discovery of the first cosmic mirage was made seventeen years ago, astronomers have been asking how common this strange phenomenon really is.

In most cases we see more than one image of the same celestial object. This effect is due to the bending and focusing of light from distant objects when it passes through the strong gravitational fields of massive galaxies on its way to us. However, from here on the opinions of the specialists diverge. While some believe that this is a very rare event, others disagree and some have even been suggesting that a substantial fraction of the very faint images seen on long exposure photos obtained with large astronomical telescopes may in fact be caused by this effect. If so, they would not be `real'.

Is it thus conceivable that the distant Universe is just a great mirror cabinet? There is only one way to answer this important question - more and better observations must be obtained. It is in the course of these investigations that the new discovery was made by a group of three European astronomers [1].

The physical principle behind a cosmic mirage is known since 1916 as a consequence of Einstein's General Relativity Theory. The gravitational field of a massive object curves the local geometry of the Universe, so light rays passing close to the object are also curved (in the same way as a `straight line' on the surface of the Earth is necessarily curved because of the curvature of the Earth's surface).

This effect was first observed by astronomers in 1919 during a total solar eclipse. Accurate positional measurements of stars seen in the dark sky near the eclipsed Sun indicated an apparent displacement in the direction opposite to the Sun, about as much as predicted by the theory. The effect was obviously due to the gravitational attraction of the stellar photons when they passed near the Sun on their way to us. This was a direct confirmation of a new phenomenon and represented a milestone in physics.

In the 1930's, astronomer Fritz Zwicky (1898 - 1974), of Swiss nationality and working at the Mount Wilson Observatory in California, realised that the same effect may also happen far out in space where galaxies and large galaxy clusters may be sufficiently compact and massive to bend the light from even more distant objects. However, it was only five decades later, in 1979, that his ideas were observationally confirmed when the first example of a cosmic mirage was discovered.

In this connection, it is of particular interest, that this gravitational lensing effect may not only result in double or multiple images of the same object, but also that the intensities of these images increase significantly, just as it is the case with an ordinary optical lens. Distant galaxies, galaxy clusters, etc. may thereby act as natural telescopes which allow us to observe objects that would otherwise have been too faint to be detected with currently available astronomical telescopes.

How to find cosmic mirages

Several thousand quasars have so far been discovered. Most astronomers believe that they represent the incredibly bright and energetic centres of distant galaxies. Their distances can be estimated by measuring the velocities with which they recede from us. From their apparent brightness measured at the telescope, it is then easy to calculate their `intrinsic luminosity', that is the amount of energy they actually radiate.

Some quasars emit more energy than others and the most active ones are known as Highly Luminous Quasars (HLQ's). Most of these may indeed be exceedingly luminous, but it is quite likely that some appear to be so luminous, because their images have been subjected to amplification by an intervening gravitational lens.

It is for this reason that the search for gravitational lenses, recognisable as such by the presence of multiple images of the quasar, is particularly promising among objects of the HLQ-type.

This is also the background for the astronomers' success with their long-term ESO Key-Programme `Gravitational Lensing'. It has the declared goal to determine what fraction of Highly Luminous Quasars are actually subject to the lensing effect. The answer to this specific question will not only help us to understand how frequent gravitational lensing really is; of even more importance is its direct relation to the amount of visible and dark matter in the Universe and also to its geometry. The more common cosmic mirages are found to be, the higher is the number of massive objects in the distant Universe and the larger is their combined mass and hence their contribution to the mean density of the Universe.

The Highly Luminous Quasar known under the name J03.13 is the seventh extragalactic gravitational lens candidate to be discovered at La Silla [2] since the beginning of this Key-Programme in 1989. The new object has apparent visual magnitude V = 17.2 (i.e., it is 30,000 times fainter than what can be seen with the unaided eye) and a measured redshift of 2.545, i.e. the distance is approximately 10 billion light-years [3].

The fact that the image of J03.13 is double was first established with the SUSI camera at the ESO 3.5-metre New Technology Telescope (NTT) in February 1994. This image, thanks to the good angular resolution of the NTT and the large dynamical range of SUSI, clearly demonstrates this. The separation of the two components (the 'decomposition') was made with an advanced image processing computer programme and the astronomers have described the detailed results in a scientific paper that has just appeared in the professional European journal Astronomy & Astrophysics (Volume 305, pages L9-L12 (1996)).

The two images of J03.13 are separated by just 0.84 arcsecond. They have the same colour and the difference in brightness is 2.1 mag, i.e. the flux ratio is about 7:1. Low dispersion spectroscopy, obtained with the multi-mode instrument EMMI at the NTT has revealed two absorption line systems (at redshifts z = 2.340 and z = 1.085). This provides evidence that two condensations of matter are located along the line-of-sight to the quasar. All these observations strongly suggest that we do see two distinct images of a single distant quasar via the effect of gravitational lensing.

Still, to be absolutely sure, it is now necessary to obtain spectra of both images of J03.13. This is not easy because of their very small angular separation and is best done with the Hubble Space Telescope. These observations will be performed during the coming months.

More than 1000 HLQs have now been observed with the major telescopes at the ESO La Silla Observatory, the Canada-France-Hawaii Telescope on Mauna Kea, the Nordic Optical Telescope at the island of La Palma (Canarian Islands) as well as with the Hubble Space Telescope in orbit around the Earth. About 1 percent of all of these objects have been found to be affected by strong gravitational lensing effects; J03.13 is one of these.

The results inferred from the related statistical studies are quite sensitive to the individual characteristics of the resolved, multiple quasar images, i.e. their angular separation, brightness difference, etc.. In this context, observations of multiple imaged quasars with an angular separation smaller than 1 arcsecond are particularly important and J03.13 is therefore of special interest. The existence of such ``tight'' images demonstrates that individual, massive elliptical and spiral galaxies at large distances are able to produce detectable lensing effects, and thus that they were already present several billions of years ago.

Another study by the same group of astronomers, based on the characteristics of the doubly imaged quasars J03.13 A&B, Q1208+1011 A&B and Q1009+025 A&B, for which the galaxies which cause the lensing effect have not yet been found, indicates that any population of dark, compact objects with masses in the range of 10e10 - 10e12 solar masses cannot contribute more than 1/100 of the critical density which is necessary to ultimately stop the universal expansion and close the Universe. 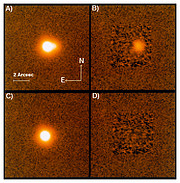