On the occasion of the successful completion of the optical figuring of the 3.58 m primary NTT mirror, the European Southern Observatory and Carl Zeiss, FRG, organize a Press Conference on Wednesday, July 13, 14.00 hours, at the Zeiss works in Oberkochen, near Stuttgart, FRG. There will be an opportunity to see the finished mirror on its computer controlled support system and information will be provided about the successful tests of the world's first, large active optics telescope.

A break-through in astronomical telescope technology

Three recent dates are of great importance for the completion of the ESO New Technology Telescope (NTT) (eso8801). They are also milestones in the long and fascinating history of the reflecting telescope.

On 11 May, 1988, the complete optical system for the NTT (primary, secondary and Nasmyth mirrors) was accepted on the basis of results for the primary mirror on the manufactoring support. On June 30, excellent agreement was achieved with the primary mirror mounted in its final cell and axial support. And today, July 8, the most important new technology aspect, the Active Optics control and optimisation of image quality was tested in function and found to give virtually perfect agreement with mathematically simulated results performed for the Carl Zeiss and ESO tests.

To understand the significance of these results, we must consider the nature of the technical specification given by ESO to Carl Zeiss. This required an exceptionally smooth form of the reflecting surface over small areas (i.e. for high frequency effects) but reduced certain low frequency error tolerances which are corrected afterwards by Active Optics, that is by slightly bending the primary in a controlled way through variations of its axial support forces. In this way, not only can an image quality be achieved which surpasses by a factor of about 3 the best previously achieved; but, even more important, this quality can be always maintained during operation. Effectively, the NTT telescope monitors its performance continually and optimizes itself automatically.

This Active Optics control system has been developed at ESO over the last 10 years and its application for the first time in the NTT represents a revolution in telescope technology, since it also allows thinner and lighter, and therefore more flexible, mirror blanks.

This successful result is the consequence of an admirable cooperation between ESO and the two firms of the Zeiss Foundation, Schott and Carl Zeiss. The primary mirror blank for the primary was delivered by Schott to Carl Zeiss in June 1986. The blank, 2 1/2 times thinner than a conventional blank, itself represents a great technical achievement in zero-expansion glass ceramic, Zerodur. Two years of intensive work at Carl Zeiss followed and have now been successfully completed. Both the Carl Zeiss and ESO tests have confirmed that the specification has been met with appreciable reserve, a remarkable technical achievement. In the course of the work, Carl Zeiss has developed its test and polishing technology to a hitherto unsurpassed level of perfection.

NTT to become operational in late 1988

The NTT mirror will now be carefully packed and transported to the ESO observatory at La Silla in Chile. After aluminisation in October and "first light" at the end of 1988, the NTT will go into normal operation in early 1989. The ESO engineers and scientists are confident that its performance will fulfill all expectations. As the first "active" telescope, the ESO NTT will easily surpass in optical quality all other telescopes ever built with the possible exception of the 2.4 m Hubble Space Telescope, awaiting launch in late 1989.

This Press Release is accompanied by a photo of the NTT primary mirror at the Zeiss works. Photos of the NTT mechanical structure and the NTT building, now erected at La Silla, are available on request. 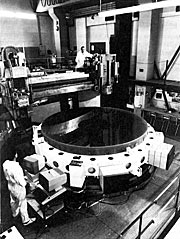 PR Image eso8805a
3.58 meter mirror for the New Technology Telescope (NTT)
Send us your comments!
Subscribe to receive news from ESO in your language
Accelerated by CDN77
Terms & Conditions