First glimpse of what Earth-sized exoplanets are made of

A new study has found that the seven planets orbiting the nearby ultra-cool dwarf star TRAPPIST-1 are all made mostly of rock, and some could potentially hold more water than Earth. The planets' densities, now known much more precisely than before, suggest that some of them could have up to 5 percent of their mass in the form of water — about 250 times more than Earth's oceans. The hotter planets closest to their parent star are likely to have dense steamy atmospheres and the more distant ones probably have icy surfaces. In terms of size, density and the amount of radiation it receives from its star, the fourth planet out is the most similar to Earth. It seems to be the rockiest planet of the seven, and has the potential to host liquid water.

Planets around the faint red star TRAPPIST-1, just 40 light-years from Earth, were first detected by the TRAPPIST-South telescope at ESO’s La Silla Observatory in 2016. In the following year further observations from ground-based telescopes, including ESO’s Very Large Telescope and NASA’s Spitzer Space Telescope, revealed that there were no fewer than seven planets in the system, each roughly the same size as the Earth. They are named TRAPPIST-1b,c,d,e,f,g and h, with increasing distance from the central star [1].

Further observations have now been made, both from telescopes on the ground, including the nearly-complete SPECULOOS facility at ESO’s Paranal Observatory, and from NASA’s Spitzer Space Telescope and the Kepler Space Telescope.  A team of scientists led by Simon Grimm at the University of Bern in Switzerland have now applied very complex computer modelling methods to all the available data and have determined the planets’ densities with much better precision than was possible before [2].

Simon Grimm explains how the masses are found: "The TRAPPIST-1 planets are so close together that they interfere with each other gravitationally, so the times when they pass in front of the star shift slightly. These shifts depend on the planets' masses, their distances and other orbital parameters. With a computer model, we simulate the planets' orbits until the calculated transits agree with the observed values, and hence derive the planetary masses."

Team member Eric Agol comments on the significance: "A goal of exoplanet studies for some time has been to probe the composition of planets that are Earth-like in size and temperature. The discovery of TRAPPIST-1 and the capabilities of ESO’s facilities in Chile and the NASA Spitzer Space Telescope in orbit have made this possible — giving us our first glimpse of what Earth-sized exoplanets are made of!"

The measurements of the densities, when combined with models of the planets’ compositions, strongly suggest that the seven TRAPPIST-1 planets are not barren rocky worlds. They seem to contain significant amounts of volatile material, probably water [3], amounting to up to 5% the planet's mass in some cases — a huge amount; by comparison the Earth has only about 0.02% water by mass!

"Densities, while important clues to the planets' compositions, do not say anything about habitability. However, our study is an important step forward as we continue to explore whether these planets could support life," said Brice-Olivier Demory, co-author at the University of Bern.

TRAPPIST-1b and c, the innermost planets, are likely to have rocky cores and be surrounded by atmospheres much thicker than Earth's. TRAPPIST-1d, meanwhile, is the lightest of the planets at about 30 percent the mass of Earth. Scientists are uncertain whether it has a large atmosphere, an ocean or an ice layer.

Scientists were surprised that TRAPPIST-1e is the only planet in the system slightly denser than Earth, suggesting that it may have a denser iron core and that it does not necessarily have a thick atmosphere, ocean or ice layer. It is mysterious that TRAPPIST-1e appears to be so much rockier in its composition than the rest of the planets. In terms of size, density and the amount of radiation it receives from its star, this is the planet that is most similar to Earth.TRAPPIST-1f, g and h are far enough from the host star that water could be frozen into ice across their surfaces. If they have thin atmospheres, they would be unlikely to contain the heavy molecules that we find on Earth, such as carbon dioxide. "It is interesting that the densest planets are not the ones that are the closest to the star, and that the colder planets cannot harbour thick atmospheres," notes Caroline Dorn, study co-author based at the University of Zurich, Switzerland.

The TRAPPIST-1 system will continue to be a focus for intense scrutiny in the future with many facilities on the ground and in space, including ESO’s Extremely Large Telescope and the NASA/ESA/CSA James Webb Space Telescope.

Astronomers are also working hard to search for further planets around faint red stars like TRAPPIST-1. As team member Michaël Gillon explains [4]: "This result highlights the huge interest of exploring nearby ultracool dwarf stars — like TRAPPIST-1 — for transiting terrestrial planets. This is exactly the goal of SPECULOOS, our new exoplanet search that is about to start operations at ESO’s Paranal Observatory in Chile.”

[1] The planets were discovered using the ground-based TRAPPIST-South at ESO’s La Silla Observatory in Chile; TRAPPIST-North in Morocco; the orbiting NASA Spitzer Space Telescope; ESO’s HAWK-I instrument on the Very Large Telescope at the Paranal Observatory in Chile; the 3.8-metre UKIRT in Hawaii; the 2-metre Liverpool and 4-metre William Herschel telescopes on La Palma in the Canary Islands; and the 1-metre SAAO telescope in South Africa.

[2] Measuring the densities of exoplanets is not easy. You need to find out both the size of the planet and its mass. The TRAPPIST-1 planets were found using the transit method — by searching for small dips in the brightness of the star as a planet passes across its disc and blocks some light. This gives a good estimate of the planet’s size. However, measuring a planet’s mass is harder — if no other effects are present planets with different masses have the same orbits and there is no direct way to tell them apart. But there is a way in a multi-planet system — more massive planets disturb the orbits of the other planets more than lighter ones. This in turn affects the timing of transits. The team led by Simon Grimm have used these complicated and very subtle effects to estimate the most likely masses for all seven planets, based on a large body of timing data and very sophisticated data analysis and modelling.

[3] The models used also consider alternative volatiles, such as carbon dioxide. However, they favour water, as vapour, liquid or ice, as the most likely largest component of the planets’ surface material as water is the most abundant source of volatiles for solar abundance protoplanetary discs.

This research was presented in a paper entitled “The nature of the TRAPPIST-1 exoplanets”, by S. Grimm et al., to appear in the journal Astronomy & Astrophysics. 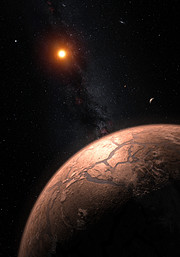 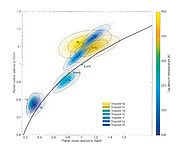 PR Image eso1805e
The sizes, masses and temperatures of the seven TRAPPIST-1 planets and others 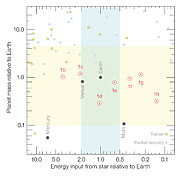 PR Video eso1805b
Planet Parade: the seven planets of TRAPPIST-1
Send us your comments!
Subscribe to receive news from ESO in your language
Accelerated by CDN77
Terms & Conditions