On 26 April 2016 ESO’s Paranal Observatory in Chile hosted an event to mark the first light for the four powerful lasers that form a crucial part of the adaptive optics systems on ESO’s Very Large Telescope. Attendees were treated to a spectacular display of cutting-edge laser technology against the majestic skies of Paranal. These are the most powerful laser guide stars ever used for astronomy and the event marks the first use of multiple laser guide stars at ESO.

ESO staff were present for the event, along with senior representatives of the companies that have manufactured the different components of the new system.

The Four Laser Guide Star Facility (4LGSF) shines four 22-watt laser beams into the sky to create artificial guide stars by making sodium atoms in the upper atmosphere glow so that they look just like real stars [1]. The artificial stars allow the adaptive optics systems to compensate for the blurring caused by the Earth’s atmosphere and so that the telescope can create sharp images. Using more than one laser allows the turbulence in the atmosphere to be mapped in far greater detail to significantly improve the image quality over a larger field of view.

The Four Laser Guide Star Facility is an example of how ESO enables European industry to lead complex research and development projects. The fibre laser used by the 4LGSF is also one of the most successful transfers of ESO technology to industry.

TOPTICA, the German main contractor, was responsible for the laser system and provided the oscillator, the frequency doubler, and the system control software. Wilhelm Kaenders, president of TOPTICA, said: “TOPTICA has enjoyed the collaboration with ESO tremendously. It is not only the personal thrill of being engaged with astronomy, an old passion, again, and working with very clever ESO technologists; it is also the inspiration that we have received for our own commercial product development.” [2]

MPBC of Canada provided the fibre laser pumps and Raman amplifiers, which are based on an ESO licensed patent. Jane Bachynski, President of MPB Communications Inc. said: “MPBC is proud to have worked with ESO in the development of Raman fibre amplifiers to much higher powers, allowing MPBC to bring this technology to the stars. This event marks the culmination of many years of hard work on behalf of all involved.” [3]

TNO in the Netherlands manufactured the optical tube assemblies, which expand the laser beams and direct them into the sky. Paul de Krom, CEO of TNO, said: “TNO valued the cooperative working environment during the development of the optical tube assemblies and looks forward to the opportunity to work with ESO and the other partners in the 4LGSF project in the future.” [4]

The 4LGSF is part of the Adaptive Optics Facility on Unit Telescope 4 of the VLT, designed specifically to provide the adaptive optics systems GALACSI/MUSE and GRAAL/HAWK-I with four sodium laser guide stars. With this new facility, Paranal Observatory continues to have the most advanced and the largest number of adaptive optics systems in operation today.

The 4LGSF lasers were developed by ESO with industry and have already been procured, among others, by the Keck Observatory (which contributed to the industrial laser development cost along with the European Commission) and the Subaru Telescope. In the future these industrial lasers will also feature on the telescopes at the Gemini Observatory and will be the preferred choice for several other observatories and extremely large telescope projects.

The new techniques developed for the Four Laser Guide Star Facility pave the way for the adaptive optics system of the European Extremely Large Telescope (E-ELT), the world’s biggest eye on the sky.

[1] The 4LGSF is the second generation laser guide star facility, built by ESO for the Adaptive Optics Facility on the UT4 VLT telescope. The two critical long-lead items for the 4LGSF, the laser system and the optical tube assemblies for the laser launch telescope systems have been procured from industry. The fibre Raman laser technology, on which the 4LGSF laser system is based, has been developed at ESO, patented and licensed to industry.

[2] This project has allowed TOPTICA to extend its products into a new wavelength and output power regime. It now produces the SodiumStar 20/2, which is recognised as a quasi-standard for existing and planned telescopes around the world. All next generation extremely large telescope projects, for example, use the SodiumStar laser as their baseline. During the seven years of collaboration with ESO the company has grown from 80 people to more than 200 today.

[3] MPBC’s collaboration with ESO has also generated an additional benefit, in the form of an offshoot product line of single frequency amplification products at virtually any wavelength, supporting novel applications for the scientific and commercial research community. 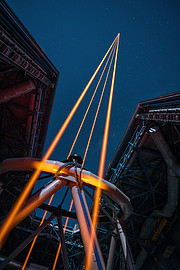 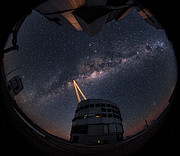 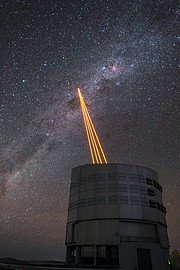 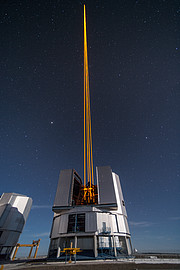 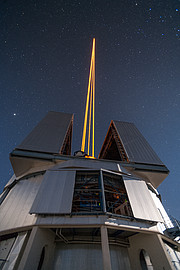 PR Video eso1613g
The most powerful laser guide star system in the world sees first light at the Paranal Observatory
Send us your comments!
Subscribe to receive news from ESO in your language
Accelerated by CDN77
Terms & Conditions