Scientists and engineers working on the world's largest ground-based astronomical project, the Atacama Large Millimeter/submillimeter Array (ALMA), have achieved another milestone — the successful linking of two ALMA astronomical antennas, synchronised with a precision of one millionth of a millionth of a second — to observe the planet Mars. ALMA is under construction by an international partnership in the Chilean Andes.

On 30 April, the team observed the first “interferometric fringes” of an astronomical source by linking two 12-metre diameter ALMA antennas, together with the other critical parts of the system. Mars was chosen as a suitable target for the observations, which demonstrate ALMA’s full hardware functionality and connectivity. This important milestone was achieved at the ALMA Operations Support Facility, high in Chile’s Atacama region, at an altitude of 2900 metres.

"We're very proud and excited to have made this crucial observation, as it proves that the various hardware components work smoothly together. This brings us another step closer to full operations for ALMA as an astronomical observatory," says Wolfgang Wild, the European ALMA Project Manager.

The two antennas used in this test will be part of ALMA’s array of 66 giant 12-metre and 7-metre diameter antennas that will observe in unison as a single giant telescope, under construction on the Chajnantor plateau above the Operations Support Facility, at an altitude of 5000 metres.

ALMA will operate as an interferometer, capturing millimetre and submillimetre wavelength signals from the sky with multiple antennas, and combining them to create extremely high resolution images, similar to those that would be obtained by a single, giant antenna with a diameter equal to the distance between the antennas used.

“This can only be achieved with the perfect synchronisation of the antennas and the electronic equipment: a precision much better than one millionth of a millionth of a second between equipment located many kilometers apart. The extreme environment where the ALMA observatory is located, with its strong winds, high altitude, and wide range of temperatures, just adds to the complexity of the observatory and to the fascinating engineering challenges we face”, comments Richard Murowinski, ALMA Project Engineer.

The astronomical target in this scientific milestone was the planet Mars. The astronomers measured the distinctive “fringes” — a regular pattern of alternating strong and weak signals — detected by the interferometer as the planet moved across the sky.

The hardware used in this successful first test included two 12-metre diameter ALMA antennas as well as the complex series of electronic processing components needed to combine the signals.

Such pairs of antennas are the basic building blocks of imaging systems that enable radio telescopes to deliver pictures that approach or even exceed the resolving power of visible light telescopes. Each antenna is combined electronically with every other antenna to form a multitude of antenna pairs. Each pair contributes unique information that is used to build a highly detailed image of the astronomical object under observation. When completed in early in the next decade, ALMA’s 66 antennas will provide over a thousand such antenna pairings, with distances between antennas up to 16 kilometres. This will enable ALMA to see with a sharpness surpassing that of the best space telescopes, and to complement ground-based optical interferometers such as the ESO Very Large Telescope Interferometer (VLTI).

“We are on target to do the first interferometry tests at the 5000-metre high-altitude site by the end of this year, and by the end of 2011 we plan to have at least 16 antennas working together as a single giant telescope,” said Thijs de Graauw, ALMA Director.

ALMA is a revolutionary astronomical telescope, comprising an array of 66 giant 12-metre and 7-metre diameter antennas observing at millimetre and submillimetre wavelengths. ALMA, which will start scientific observations in 2011, is the most powerful telescope for observing the cool Universe — molecular gas and dust as well as the relic radiation of the Big Bang. ALMA will study the building blocks of stars, planetary systems, galaxies and life itself, and will address some of the deepest questions of our cosmic origins.

ALMA will operate at wavelengths of 0.3 to 9.6 mm. At these wavelengths, a high, dry site is needed for the telescope to be able to see through the Earth's atmosphere. This is why ALMA is being built on the breathtaking 5000-metre-high plateau of Chajnantor in the Atacama region of Chile, the highest astronomy site in the world. ALMA will offer unprecedented sensitivity and resolution. The 12-metre antennas will have reconfigurable baselines ranging from 15 m to 16 km. ALMA will have a resolution ten times better than the Hubble Space Telescope.

The ALMA project is a partnership between the scientific communities of East Asia, Europe and North America with Chile. ESO is the European partner in ALMA. 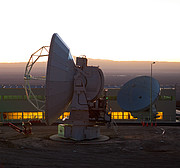 PR Image eso0918a
The two ALMA antennas
Send us your comments!
Subscribe to receive news from ESO in your language
Accelerated by CDN77
Terms & Conditions