Staring for the equivalent of every night for two weeks at the same little patch of sky with ESO's Very Large Telescope, an international team of astronomers has found the extremely faint light from teenage galaxies billions of light years away. These galaxies, which the research team believes are the building blocks of normal galaxies like our Milky Way, had eluded detection for three decades, despite intensive searches.

The team, led by Martin Haehnelt of the University of Cambridge, UK, Michael Rauch and George Becker of the Observatories of the Carnegie Institution, USA, and Andy Bunker of the Anglo-Australian Observatory, reports their results in the 1 March 2008 issue of the Astrophysical Journal.

"This is the first time that the sky has been searched to this depth and the unrivalled sensitivity of the picture taken with the VLT was key to succeeding," says Haehnelt.

Experts have long speculated that galaxies like ours were created by the amalgamation of proto-galaxies early in the history of the Universe, but the light from these fragments was so faint that astronomers had struggled to prove they were there at all. Astronomers thought that the teenage galaxies must be out there because they were blocking part of the light from objects even further away in space.

"Previous attempts have usually been frustrated by the difficulty of detecting extremely faint objects: the amount of time required even with an 8-metre class telescope like the VLT considerably exceeds typical observing time awards. We have thus exploited the periods of less good weather with the FORS2 spectrograph at the VLT, taking advantage of the service observing mode," says Becker.

In service mode, ESO staff astronomers at Paranal are responsible for carrying out the actual observations, taking all the specific requirements into account.

"We were actually trying to measure a faint signal from intergalactic gas caused by the cosmic ultraviolet background radiation. But as often happens in science, we got a surprise and found something we weren't looking for - dozens of faint, discrete objects emitting radiation from neutral hydrogen in the so-called Lyman alpha line, a fundamental signature of protogalaxies," explains Rauch.

The same small patch of sky, centred on a quasar, was observed between 2004 and 2006 for an unprecedented 92 hours, the equivalent of about 12 complete nights, allowing the astronomers to obtain a spectrum of the Universe when it was only 2 billion years old.

The result of this search is the detection of 27 faint objects. The weak light signal that the team has detected from these distant objects implies low star formation rates and a small amount of chemical enrichment, suggesting that they are indeed at an early stage of formation.

"The properties of the emitters seem to provide an excellent match to those of 'Damped Lyman Alpha Systems', the main reservoir of neutral hydrogen in the far Universe," says Andy Bunker. "This suggests that the objects found are the long-sought counterparts of the DLAS in emission. The new observations confirm theoretical research proposing that galaxies like our own have formed by the amalgamation of small proto-galaxies early on in the history of the Universe," he adds.

"What makes our discovery particularly exciting is that it opens the route to find large numbers of building blocks of normal galaxies and that we will now be able to study in detail how galaxies like our Milky Way have come together," says Martin Haehnelt. 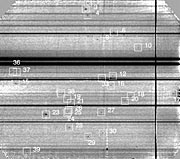 PR Image eso0752a
A 92-hour long spectrum
Send us your comments!
Subscribe to receive news from ESO in your language
Accelerated by CDN77
Terms & Conditions