The Giant that Turned Out to be a Dwarf

New data obtained on the apparent celestial couple, NGC 5011 B and C, taken with the 3.6-m ESO telescope, reveal that the two galaxies are not at the same distance, as was believed for the past 23 years. The observations show that NGC 5011C is not a giant but a dwarf galaxy, an overlooked member of a group of galaxies in the vicinity of the Milky Way.

The appearance of NGC 5011C, with its low density of stars and absence of distinctive features, would normally lead astronomers to classify it as a nearby dwarf elliptical galaxy. On the other hand, the galaxy's distance - as reported in the scientific literature - makes it a member of the more distant Centaurus cluster. As such, it would belong to the same cluster as its brighter, redder companion on the sky, the lenticular galaxy NGC 5011B, which is seen almost edge-on.

"This is however a problem," says Ivo Saviane, from ESO, who together with colleague Helmut Jerjen (Mt Stromlo Observatory, Australia) studied this peculiar system, "as despite the small distance between the two galaxies this would imply from their projection on the sky if they were indeed at the same distance - only 45,000 light-years, half the size of our Milky Way - there is no obvious sign of interaction between the two."

Moreover, if the two galaxies were at the same distance, then NGC 5011C would be larger than NGC 5011B in real size, making it a kind of galaxy never seen before.

Saviane and Jerjen therefore used the ESO 3.6-m telescope at La Silla to take images and spectra of the galaxies. The astronomers then found that contrary to what is published, the two galaxies have very different redshifts, with NGC 5011C moving away from us five times slower than its companion on the sky. "This indicates they are at different distances and not at all associated", says Jerjen. "Clearly, NGC 5011C belongs to the close group of galaxies centred around Centaurus A, while NGC 5011B is part of the much farther Centaurus cluster."

The astronomers also established that the two galaxies have very different intrinsic properties. NGC 5011B contains for example more heavy chemical elements than NGC 5011C, and the latter seems to contain only about 10 million times the mass of the Sun in stars and is therefore a true dwarf galaxy. For comparison, our Milky Way contains thousands of times more stars.

"Our new observations with the 3.6-m ESO telescope thus confirm a new member of the nearby Centaurus A group whose true identity remained hidden because of coordinate confusion and wrong distance estimates in the literature for the last 23 years," says Saviane.

With this new distance determination, the astronomers also established that NGC 5011C lies 500,000 light-years away from the dominant galaxy in its group, Centaurus A. Centaurus A (NGC 5128) is the nearest giant elliptical galaxy, at a distance of about 13 million light-years. It is currently merging with a spiral companion galaxy. It possesses a very massive black hole at its centre and is a source of strong radio and X-ray emission.

The research discussed here is presented in an article in press in the Astronomical Journal, vol. 133, p. 1892: "NGC 5011C: An overlooked dwarf galaxy in the Centaurus A group", by Ivo Saviane and Helmut Jerjen. It is also available at https://arxiv.org/abs/astro-ph/0701280. 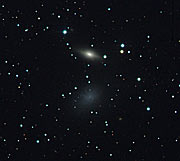 PR Image eso0709a
The overlooked dwarf and its apparent companion
Send us your comments!
Subscribe to receive news from ESO in your language
Accelerated by CDN77
Terms & Conditions