Far Away Galaxy Under The Microscope

An international group of astronomers have discovered large disc galaxies akin to our Milky Way that must have formed on a rapid time scale, only 3 billion years after the Big Bang. In one of these systems, the combination of adaptive optics techniques with the new SINFONI spectrograph on ESO's Very Large Telescope (VLT) resulted in a record-breaking resolution of a mere 0.15 arcsecond, giving an unprecedented detailed view of the anatomy of such a distant proto-disc galaxy.

"We have been able, for the first time, to obtain well resolved, two dimensional images of the gas motions in distant star forming galaxies, whose light has traveled more than 11 billion years to the Earth," said Reinhard Genzel, lead author of a paper in this week's issue of Nature in which these results are presented.

This tells the story how galaxies looked like a mere 3 billion years after the Big Bang.

Over the past decade astronomers have established a global framework of how galaxies formed and evolved when the Universe was only a few billion years old. Gas of ordinary matter cooled and collected in concentrations of the mysterious 'dark' matter (so called dark matter halos). Since that time and up to the present epoch collisions and mergers of galaxies subsequently led to the hierarchical build-up of galaxy mass. This general picture leaves open, however, on what timescales galaxies were assembled and when and how bulges and discs, the primary components of present day galaxies, were formed.

A major study of distant, luminous star forming galaxies at ESO's VLT, the 'SINS' (Spectroscopic Imaging Survey in the Near-Infrared with SINFONI) survey, has now resulted in a major break-through on these questions. This study exploited SINFONI [1], a novel infrared 'integral field spectrometer' that simultaneously delivers sharp images, with adaptive optics, and highly resolved colour information (spectra) of an object on the sky.

In the case of the galaxy BzK155043 at cosmological redshift 2.4, the SINFONI observations achieved an angular resolution of 0.15 arcsecond, a mere 4000 light years at the distance of this high redshift galaxy. With this superior angular resolution the data reveal the physical and dynamical properties in unprecedented detail. Surprisingly the observations reveal a large and massive rotating proto-disc that is channeling gas toward a growing central stellar bulge. The high gas surface densities, the large star formation rate and the moderately young stellar ages derived from these observations suggest that the system was assembled rapidly, by fragmentation and star formation in an initially very gas rich proto-disc. SINS observations of several other massive, high redshift galaxies give similar results.

"When we started the SINS programme," said Genzel, "we expected to see mostly irregular and perhaps even chaotic motions caused by the frequent merger activity in the young Universe. We were in for a major surprise when we found a number of large, rotating and gas rich disc galaxies whose properties are quite similar to the present day Milky Way."

The fact that these galaxies are so large and rotate rapidly indicates that the gas has a similar amount of rotation as the dark matter halo from which it cooled, thus empirically solving an important question of galaxy formation.

Natascha Förster Schreiber, lead author of another recent SINS paper in the Astrophysical Journal said: "We now need to understand how these early proto-discs evolved subsequently in time. Our suspicion is that they might not have been stable."

The SINFONI data suggest that the proto-discs may have eventually been transformed to dense elliptical galaxies, either by internal processes, such as the spectacular gas inflows observed in BzK15504, or by collisions and mergers with other galaxies, which were frequent in the dense environments in which the high redshift luminous star forming galaxies appear to reside in.

Another important aspect of the work are the very high star formation rates deduced for many of the luminous star forming high redshift galaxies, about one hundred times greater than in the present-day Milky Way.

"We have a growing body of evidence that massive galaxies formed much more rapidly in the redshift range 2-3 than originally anticipated," said Andrea Cimatti, team member from the University of Bologna. "The new SINFONI data give us a first glimpse what processes might be involved."

The SINS programme on the VLT is a stunning demonstration of what is going to be possible in the next few years with the combination of integral field spectroscopy and adaptive optics.

[1]: SINFONI is a combination of a novel infrared 'integral field spectrometer' (SPIFFI) and a special adaptive optics module (MACAO). The integral field module SPIFFI gives detailed colour, or spectral, information for each of 2000 spatial points on the sky, arranged over a contiguous two dimensional field of 32 times 64 pixels. The adaptive optics module MACAO senses the distortion of the images created by the refraction and turbulence of the Earth's atmosphere by rapid analysis of the images of a star near the object under study. A deformable mirror in the light path of the instrument then is employed to undo the distortions caused by the atmosphere. In its unique adaptive optics mode, SINFONI thus delivers very high resolution images for each of about 2000 spectral channels. SINFONI was developed and built by an international consortium consisting of the Max-Planck Institute for Extraterrestrial Physics, Garching, FRG (P.I. Frank Eisenhauer), ESO (P.I. Henri Bonnet) and NOVA, Leiden, the Netherlands (coordinator P. van der Werf). For more information on SINFONI see the SINFONI web pages and eso0426. 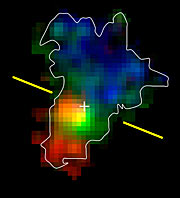 PR Video eso0631a
Video News Release 19: Far away Galaxy under the Microscope (eso0631a)
Send us your comments!
Subscribe to receive news from ESO in your language
Accelerated by CDN77
Terms & Conditions