Using ESO's Very Large Telescope, astronomers have discovered a rather unusual system, in which two planet-size stars, of different colours, orbit each other. One is a rather hot white dwarf, weighing a little bit less than half as much as the Sun. The other is a much cooler, 55 Jupiter-masses brown dwarf.

"Such a system must have had a very troubled history", said Pierre Maxted, lead author of the paper that reports the study in this week's issue of Nature. "Its existence proves that the brown dwarf came out almost unaltered from an episode in which it was swallowed by a red giant."

The two objects, separated by less than 2/3 of the radius of the Sun or only a few thousandths of the distance between the Earth and the Sun, rotate around each other in about 2 hours. The brown dwarf [1] moves on its orbit at the amazing speed of 800 000 km/h!

The two stars were not so close in their past. Only when the solar-like star that has now become a white dwarf [1] was a red giant, did the separation between the two objects diminish drastically. During this fleeting moment, the giant engulfed its companion. The latter, feeling a large drag similar to trying to swim in a bath full of oil, spiralled in towards the core of the giant. The envelope of the giant was finally ejected, leaving a binary system in which the companion is in a close orbit around a white dwarf.

"Had the companion been less than 20 Jupiter masses, it would have evaporated during this phase", said Maxted."

The brown dwarf shouldn't rejoice too quickly to have escaped this doom, however. Einstein's General Theory of Relativity predicts that the separation between the two stars will slowly decrease.

"Thus, in about 1.4 billion years, the orbital period will have decreased to slightly more than one hour", said Ralf Napiwotzki, from the University of Hertfordshire (UK) and co-author of the study. "At that stage, the two objects will be so close that the white dwarf will work as a giant "vacuum cleaner", drawing gas off its companion, in a cosmic cannibal act."

The low mass companion to the white dwarf (named WD0137-349) was found using spectra taken with EMMI at ESO's New Technology Telescope at La Silla. The astronomers then used the UVES spectrograph on ESO's Very Large Telescope to record 20 spectra and so measure the period and the mass ratio.

[1]: Brown dwarfs are 'failed stars' that have less than 75 Jupiter masses and are unable to sustain nuclear fusion in their core.

[2]: White dwarfs are Earth-size, hot and extremely dense stars that represent the end products of the evolution of solar-like stars. During most of their life, such stars draw most of their energy from the transformation of hydrogen into helium. But at some moment, the hydrogen fuel will run out: this phase - still many billions of years into the future for the Sun - signals the beginning of profound, increasingly rapid changes in the star which will ultimately lead to its death. The star dramatically increases in radius, becoming a red giant. Later, it will expel huge quantity of gas and appear as a planetary nebula. After the planetary nebula has dissipated into interstellar space, the star left behind is a white dwarf. 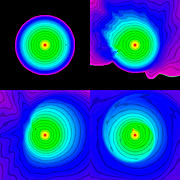 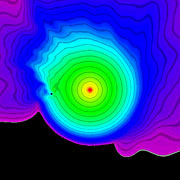