ESO, the European Organisation for Astronomical Research in the Southern Hemisphere, announced today that it has signed a contract with the consortium led by Alcatel Alenia Space and composed also of European Industrial Engineering (Italy) and MT Aerospace (Germany), to supply 25 antennas for the Atacama Large Millimeter Array (ALMA) project, along with an option for another seven antennas. The contract, worth 147 million euros, covers the design, manufacture, transport and on-site integration of the antennas. It is the largest contract ever signed in ground-based astronomy in Europe.

The ALMA antennas present difficult technical challenges, since the antenna surface accuracy must be within 25 microns, the pointing accuracy within 0.6 arc seconds, and the antennas must be able to be moved between various stations on the ALMA site. This is especially remarkable since the antennas will be located outdoor in all weather conditions, without any protection. Moreover, the ALMA antennas can be pointed directly at the Sun. ALMA will have a collecting area of more than 5,600 square meters, allowing for unprecedented measurements of extremely faint objects.

The signing ceremony took place on December 6, 2005 at ESO Headquarters in Garching, Germany. "This contract represents a major milestone. It allows us to move forward, together with our American and Japanese colleagues, in this very ambitious and unique project," said ESO's Director General, Dr. Catherine Cesarsky. "By building ALMA, we are giving European astronomers access to the world's leading submillimetre facility at the beginning of the next decade, thereby fulfilling Europe's desire to play a major role in this field of fundamental research."

Pascale Sourisse, Chairman and CEO of Alcatel Alenia Space, said: "We would like to thank ESO for trusting us to take on this new challenge. We are bringing to the table not only our recognized expertise in antenna development, but also our long-standing experience in coordinating consortiums in charge of complex, high-performance ground systems."

ALMA is an international astronomy facility. It is a partnership between Europe, North America and Japan, in cooperation with the Republic of Chile. The European contribution is funded by ESO and Spain, with the construction and operations being managed by ESO. A matching contribution is being made by the USA and Canada, who will also provide 25 antennas. Japan will provide additional antennas, thus making this a truly worldwide endeavour.

ALMA will be located on the 5,000m high Llano de Chajnantor site in the Atacama Desert of Northern Chile. ALMA will consist of a giant array of 12-m antennas separated by baselines of up to 18 km and is expected to start partial operation by 2010-2011.

The excellent site, the most sensitive receivers developed so far, and the large number of antennas will allow ALMA to have a sensitivity that is many times better than any other comparable instrument.

Millimetre-wave astronomy is the study of the universe in the spectral region between what is traditionally considered radio waves and infrared radiation. In this realm, ALMA will study the evolution of galaxies, including very early stages, gather crucial data on the formation of stars, proto-planetary discs, and planets, and provide new insights on the familiar objects of our own solar system.

A prototype antenna had already been built by Alcatel Alenia Space and European Industrial Engineering and thoroughly tested along with prototypes antennas from Vertex/LSI and Mitsubishi at the ALMA Antenna Test Facility located at the Very Large Array site in Socorro, New Mexico.

For more information on the ALMA project, please go to http://www.eso.org/projects/alma/. 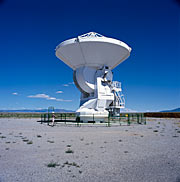 PR Image eso0540c
Artist's impression of the ALMA project
Send us your comments!
Subscribe to receive news from ESO in your language
Accelerated by CDN77
Terms & Conditions