The ESO Very Large Telescope (VLT) has just passed an impressive milestone with the publication of the 1,000th peer-reviewed scientific article based on data from the world's largest and most advanced optical and near-infrared telescope.

"This remarkable landmark, reached in only six years of operations is another clear demonstration of the unique capabilities of this telescope, a true flagship in European research that is continuously opening new horizons in astrophysics", says Catherine Cesarsky, ESO Director General.

The number of scientific papers quantifies the success of an observatory. The passing of this milestone demonstrates the excellent acceptance of the VLT and its instrumentation by the astronomers.

For Alvio Renzini, VLT Programme Scientist: "It is exhilarating to see how well the astronomical community has made use of the capabilities offered by the VLT and VLTI. The astronomers are fully exploiting the unique flexibility of the VLT, which with four telescopes and ten instruments permanently mounted offers at any time a set of observational opportunities that has no parallel at any other observatory worldwide. This explains the still increasing demand of observing time, and only one out of four or five submitted research proposals can be given observing time."

In 2004 alone, 338 refereed papers using VLT data appeared. This corresponds to almost one new scientific paper being published per day, an increase of more than 25% compared to the previous year.

The Very Large Telescope comprises four 8.2-m reflecting Unit Telescopes (UTs) and will in due time also include four moving 1.8-m Auxiliary Telescopes (ATs), two of which have successfully passed their first tests in January 2004 and February 2005.

In routine operation since April 1, 1999 when the first Unit Telescope became operational, the VLT has grown to include all four Unit Telescopes. The instrument suite covers most wavelengths accessible from the ground, adaptive optics instruments for small-field high spatial-resolution imaging, high-resolution spectroscopy and multi-object spectroscopy. The VLT was also designed from the beginning with the use of interferometry as a major goal. The VLT Interferometer (VLTI) combines starlight captured by two or three UTs or ATs, dramatically increasing the spatial resolution and showing fine details of a large variety of celestial objects.

The impressive battery of top-ranking instruments, coupled with the enormous light-collecting power of the VLT and what is certainly the best overall efficiency for an observatory of this size, has provided a real research bonanza of outstanding scientific results, some of which have been true breakthroughs. They include the amazing new knowledge about the Black Hole at the Galactic Centre, the first image of an exoplanet, the discovery of the most distant group of galaxies, the detection of spatially resolved emission from an Active Galactic Nucleus, the study of resolved stellar populations in nearby galaxies, etc. Other important discoveries deal with accurate cosmochronological dating by means of Uranium and Thorium spectral lines, high-redshift galaxy rotation curves, micro-quasars, properties of the optical counterparts of gamma-ray bursts, high-redshift supernovae and trans-neptunian objects.

These and other results are among the 1,000 scientific papers published in the six years of operation. The large impact of VLT-based results is demonstrated by their citation rates, which are among the best of ground-based observatories. Some refereed papers based on VLT data have a citation mark close to 250 only three or four years after publication.

Jason Spyromilio, Director of the La Silla Paranal Observatory, believes this is only the beginning: "With second generation instruments to be installed and the start of operations of the Auxiliary Telescopes, providing the Very Large Telescope Interferometer a further boost, I have no doubt that the VLT will continue to lead the field of ground-based astronomy for many years to come, bringing astronomers a wealth of new discoveries".

All refereed publications based on ESO telescopes, including the Very Large Telescope, can be retrieved through the Telescope Bibliography Web interface at http://www.eso.org/libraries/telbib.html

Created in 1962, ESO is now supported by eleven member states (Belgium, Denmark, Finland, France, Germany, Italy, The Netherlands, Portugal, Sweden, Switzerland, and the United Kingdom). It operates major telescopes on two remote sites, all located in Chile: La Silla, about 600 km north of Santiago and at an altitude of 2400m; Paranal, a 2600m high mountain in the Atacama Desert 120 km south of the coastal city of Antofagasta. Most recently, ESO has started the construction of an observatory at Chajnantor, a 5000m high site, also in the Atacama Desert. ESO's headquarters are located in Garching, in the vicinity of Munich (Germany). 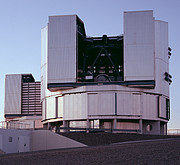 PR Image eso0514a
The VLT Unit Telescopes Yepun and Melipal
Send us your comments!
Subscribe to receive news from ESO in your language
Accelerated by CDN77
Terms & Conditions