Astronomers unveil a few hundred clusters of galaxies by observing their emission in the X-Ray wavelengths. This study also provides new insights on the amount of dark matter in the Universe.

Clusters of galaxies are very large building blocks of the Universe. These gigantic structures contain hundreds to thousands of galaxies and, less visible but equally interesting, an additional amount of "dark matter" whose origin still defies the astronomers, with a total mass of thousands of millions of millions times the mass of our Sun. The comparatively nearby Coma cluster, for example, contains thousands of galaxies and measures more than 20 million light-years across. Another well-known example is the Virgo cluster at a distance of about 50 million light-years, and still stretching over an angle of more than 10 degrees in the sky!

Following this idea, a European team of astronomers [2], under the leadership of Hans Böhringer (MPE, Garching, Germany), Luigi Guzzo (INAF, Milano, Italy), Chris A. Collins (JMU, Liverpool), and Peter Schuecker (MPE, Garching) has embarked on a decade-long study of these gargantuan structures, trying to locate the most massive of clusters of galaxies.

Since about one-fifth of the optically invisible mass of a cluster is in the form of a diffuse very hot gas with a temperature of the order of several tens of millions of degrees, clusters of galaxies produce powerful X-ray emission. They are therefore best discovered by means of X-ray satellites.

For this fundamental study, the astronomers thus started by selecting candidate objects using data from the X-ray Sky Atlas compiled by the German ROSAT satellite survey mission. This was the beginning only - then followed a lot of tedious work: making the final identification of these objects in visible light and measuring the distance (i.e., redshift [3]) of the cluster candidates.

The determination of the redshift was done by means of observations with several telescopes at the ESO La Silla Observatory in Chile, from 1992 to 1999. The brighter objects were observed with the ESO 1.5-m and the ESO/MPG 2.2-m telescopes, while for the more distant and fainter objects, the ESO 3.6-m telescope was used.

Carried out at these telescopes, the 12 year-long programme is known to astronomers as the REFLEX (ROSAT-ESO Flux Limited X-ray) Cluster Survey. It has now been concluded with the publication of a unique catalogue with the characteristics of the 447 brightest X-ray clusters of galaxies in the southern sky. Among these, more than half the clusters were discovered during this survey.

Galaxy clusters are far from being evenly distributed in the Universe. Instead, they tend to conglomerate into even larger structures, "super-clusters". Thus, from stars which gather in galaxies, galaxies which congregate in clusters and clusters tying together in super-clusters, the Universe shows structuring on all scales, from the smallest to the largest ones. This is a relict of the very early (formation) epoch of the Universe, the so-called "inflationary" period. At that time, only a minuscule fraction of one second after the Big Bang, the tiny density fluctuations were amplified and over the eons, they gave birth to the much larger structures.

Because of the link between the first fluctuations and the giant structures now observed, the unique REFLEX catalogue - the largest of its kind - allows astronomers to put considerable constraints on the content of the Universe, and in particular on the amount of dark matter that is believed to pervade it. Rather interestingly, these constraints are totally independent from all other methods so far used to assert the existence of dark matter, such as the study of very distant supernovae (see e.g. eso9861) or the analysis of the Cosmic Microwave background (e.g. the WMAP satellite). In fact, the new REFLEX study is very complementary to the above-mentioned methods.

The REFLEX team concludes that the mean density of the Universe is in the range 0.27 to 0.43 times the "critical density", providing the strongest constraint on this value up to now. When combined with the latest supernovae study, the REFLEX result implies that, whatever the nature of the dark energy is, it closely mimics a Universe with Einstein's cosmological constant.

The REFLEX catalogue will also serve many other useful purposes. With it, astronomers will be able to better understand the detailed processes that contribute to the heating of the gas in these clusters. It will also be possible to study the effect of the environment of the cluster on each individual galaxy. Moreover, the catalogue is a good starting point to look for giant gravitational lenses, in which a cluster acts as a giant magnifying lens, effectively allowing observations of the faintest and remotest objects that would otherwise escape detection with present-day telescopes.

But, as Hans Böhringer says: "Perhaps the most important advantage of this catalogue is that the properties of each single cluster can be compared to the entire sample. This is the main goal of surveys: assembling the pieces of a gigantic puzzle to build the grander view, where every single piece then gains a new, more comprehensive meaning."

[3] In astronomy, the "redshift" denotes the fraction by which the lines in the spectrum of an object are shifted towards longer wavelengths. Since the redshift of a cosmological object increases with distance, the observed redshift of a remote galaxy also provides an estimate of its distance. 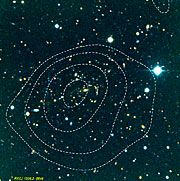 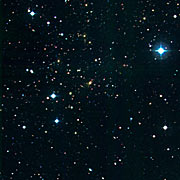 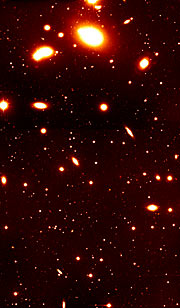 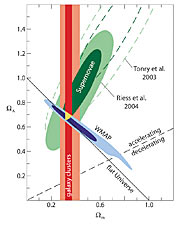 PR Video eso0419a
Galaxy Clusters in the REFLEX catalogue
Send us your comments!
Subscribe to receive news from ESO in your language
Accelerated by CDN77
Terms & Conditions