On February 25, 2003, the European Southern Observatory (ESO) and the US National Science Foundation (NSF) are signing a historic agreement to construct and operate the world's largest and most powerful radio telescope, operating at millimeter and sub-millimeter wavelength [1]. The Director General of ESO, Dr. Catherine Cesarsky, and the Director of the NSF, Dr. Rita Colwell, act for their respective organizations. Known as the Atacama Large Millimeter Array (ALMA), the future facility will encompass sixty-four interconnected 12-meter antennae at a unique, high-altitude site at Chajnantor in the Atacama region of northern Chile. ALMA is a joint project between Europe and North America. In Europe, ESO is leading on behalf of its ten member countries and Spain. In North America, the NSF also acts for the National Research Council of Canada and executes the project through the National Radio Astronomy Observatory (NRAO) operated by Associated Universities, Inc. (AUI). The conclusion of the ESO-NSF Agreement now gives the final green light for the ALMA project. The total cost of approximately 650 million Euro (or US Dollars) is shared equally between the two partners.

Dr. Cesarsky is excited: "This agreement signifies the start of a great project of contemporary astronomy and astrophysics. Representing Europe, and in collaboration with many laboratories and institutes on this continent, we together look forward towards wonderful research projects. With ALMA we may learn how the earliest galaxies in the Universe really looked like, to mention but one of the many eagerly awaited opportunities with this marvellous facility".

"With this agreement, we usher in a new age of research in astronomy" says Dr. Colwell. "By working together in this truly global partnership, the international astronomy community will be able to ensure the research capabilities needed to meet the long-term demands of our scientific enterprise, and that we will be able to study and understand our universe in ways that have previously been beyond our vision".

The recent Presidential decree from Chile for AUI and the agreement signed in late 2002 between ESO and the Government of the Republic of Chile recognize the interest that the ALMA Project has for Chile, as it will deepen and strengthen the cooperation in scientific and technological matters between the parties.

A joint ALMA Board has been established which oversees the realisation of the ALMA project via the management structure. This Board meets for the first time on February 24-25, 2003, at NSF in Washington and will witness this historic event.

The Atacama Large Millimeter Array (ALMA) will be one of astronomy's most powerful telescopes - providing unprecedented imaging capabilities and sensitivity in the corresponding wavelength range, many orders of magnitude greater than anything of its kind today.

ALMA will be an array of 64 antennae that will work together as one telescope to study millimeter and sub-millimeter wavelength radiation from space. This radiation crosses the critical boundary between infrared and microwave radiation and holds the key to understanding such processes as planet and star formation, the formation of early galaxies and galaxy clusters, and the formation of organic and other molecules in space.

"ALMA will be one of astronomy's premier tools for studying the universe" says Nobel Laureate Riccardo Giacconi, President of AUI (and former ESO Director General (1993-1999)). "The entire astronomical community is anxious to have the unprecedented power and resolution that ALMA will provide".

The President of the ESO Council, Professor Piet van der Kruit, agrees: "ALMA heralds a break-through in sub-millimeter and millimeter astronomy, allowing some of the most penetrating studies the Universe ever made. It is safe to predict that there will be exciting scientific surprises when ALMA enters into operation".

What is millimeter and sub-millimeter wavelength astronomy?

Astronomers learn about objects in space by studying the energy emitted by those objects. Our Sun and the other stars throughout the Universe emit visible light. But these objects also emit other kinds of light waves, such as X-rays, infrared radiation, and radio waves. Some objects emit very little or no visible light, yet are strong sources at other wavelengths in the electromagnetic spectrum.

Much of the energy in the Universe is present in the sub-millimeter and millimeter portion of the spectrum. This energy comes from the cold dust mixed with gas in interstellar space. It also comes from distant galaxies that formed many billions of years ago at the edges of the known universe.

With ALMA, astronomers will have a uniquely powerful facility with access to this remarkable portion of the spectrum and hence, new and wonderful opportunities to learn more about those objects.

Current observatories simply do not have anywhere near the necessary sensitivity and resolution to unlock the secrets that abundant sub-millimeter and millimeter wavelength radiation can reveal. It will take the unparalleled power of ALMA to fully study the cosmic emission at this wavelength and better understand the nature of the universe.

Scientists from all over the world will use ALMA. They will compete for observing time by submitting proposals, which will be judged by a group of their peers on the basis of scientific merit.

ALMA's ability to detect remarkably faint sub-millimeter and millimeter wavelength emission and to create high-resolution images of the source of that emission gives it capabilities not found in any other astronomical instruments. ALMA will therefore be able to study phenomena previously out of reach to astronomers and astrophysicists, such as:

How will ALMA work?

All of ALMA's 64 antennae will work in concert, taking quick "snapshots" or long-term exposures of astronomical objects. Cosmic radiation from these objects will be reflected from the surface of each antenna and focussed onto highly sensitive receivers cooled to just a few degrees above absolute zero in order to suppress undesired "noise" from the surroundings. There the signals will be amplified many times, digitized, and then sent along underground fiber-optic cables to a large signal processor in the central control building.

This specialized computer, called a correlator - running at 16,000 million-million operations per second - will combine all of the data from the 64 antennae to make images of remarkable quality.

Since atmospheric water vapor absorbs millimeter and (especially) sub-millimeter waves, ALMA must be constructed at a very high altitude in a very dry region of the earth.

Extensive tests showed that the sky above the Atacama Desert of Chile has the excellent clarity and stability essential for ALMA. That is why ALMA will be built there, on Llano de Chajnantor at an altitude of 5,000 metres in the Chilean Andes.

A series of views of this site, also in high-resolution suitable for reproduction, is available at the Chajnantor Photo Gallery.

June 1998: Phase 1 (Research and Development);
June 1999: European/American Memorandum of Understanding;
February 2003: Signature of the bilateral Agreement;
2004: Tests of the Prototype System;
2007: Initial scientific operation of a partially completed array;
2011: End of construction of the array .

[1] This is a joint press release by ESO and the NSF. 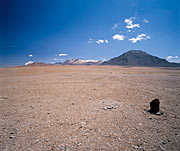 PR Image eso0306d
The future ALMA site at Llano de Chajnantor
Send us your comments!
Subscribe to receive news from ESO in your language
Accelerated by CDN77
Terms & Conditions