During his current tour of countries in South America, the Honourable Foreign Minister of Germany, Mr. Joschka Fischer, stopped over at the ESO Paranal Observatory Wednesday night (March 6 - 7, 2002).

Arriving in Antofagasta, capital of the II Chilean region, the Foreign Minister and his suite was met by local Chilean officials, headed by Mr. Jorge Molina, Intendente of the Region, as well as His Excellency, the German Ambassador to Chile, Mr. Georg CS Dick and others. In the afternoon of March 6, the Foreign Minister, accompanied by a distinguished delegation from the German Federal Parliament as well as by businessmen from Germany, travelled to Paranal, site of the world's largest optical/infrared astronomical facility, the ESO Very Large Telescope (VLT).

The visitors were shown the various high-tech installations at this remote desert site, some of which have been constructed by German firms. Moreover, most of the large, front-line VLT astronomical instruments have been built in collaboration between ESO and European research institutes, several of these in Germany.

One of the latest arrivals to Paranal, the CONICA camera, was built under an ESO contract by the Max-Planck-Institutes for Astronomy (MPIA, in Heidelberg) and Extraterrestrial Physics (MPE, in Garching).

The guests had the opportunity to enjoy the spectacular sunset over the Pacific Ocean from the terrace of the new Residencia building. At the beginning of the night, the Minister was invited to the Control Room for the VLT Interferometer (VLTI) from where this unique new facility is now being thoroughly tested before it enters into service later this year.

In his expression of thanks, Minister Fischer enthusiastically referred to his visit at Paranal. He said he was truly impressed by the technology of the telescopes and considered the VLT project a model of European technological and scientific cooperation.

Later in the evening, the Minister was invited to perform an observing sequence at the console of the MELIPAL telescope. 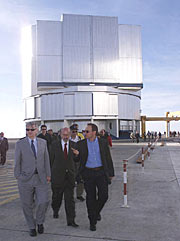 PR Image eso0207d
At the VINCI instrument in the Interferometric Laboratory
Send us your comments!
Subscribe to receive news from ESO in your language
Accelerated by CDN77
Terms & Conditions