Wide view of the Crab Nebula 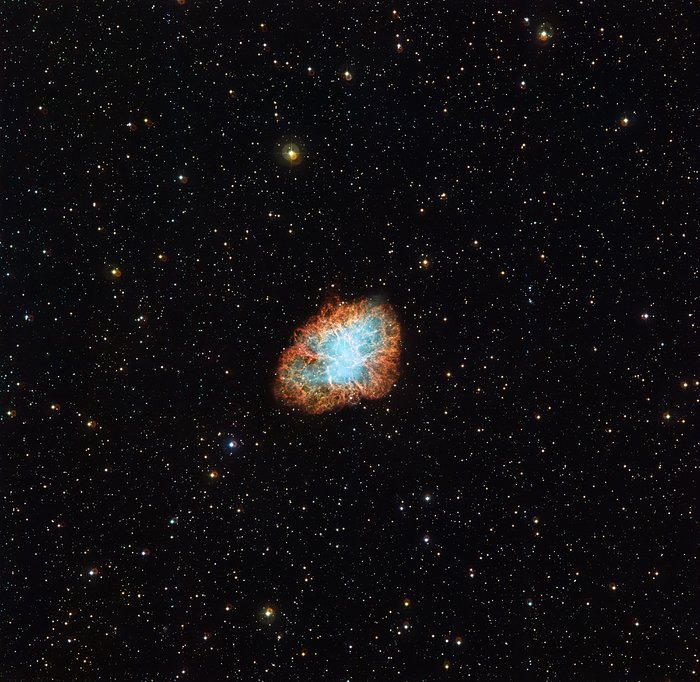 The Crab Nebula, which also goes by the names Messier 1, NGC 1952 and Taurus A, is one of the best studied astronomical objects in the sky. It is the remnant of a supernova explosion which was observed by Chinese astronomers in 1054. The tangled filaments visible in this image are the remains of the exploded star, which are still expanding outwards at about 1500 kilometres per second.

Although not visible to the naked eye due to foreground filaments of helium and hydrogen the heart of the nebula hosts two faint stars. It is one of these that is responsible for the nebula that we see today — a star that is known as the Crab Pulsar, or CM Tau. This is the small, dense, corpse of the original star that caused the supernova. It is now only about 20 kilometres in diameter and rotates around its axis 30 times every second!

The star emits pulses of radiation in all wavelengths, ranging from gamma rays — for which it is one of the brightest sources in the sky — to radio waves. The radiation from the star is so strong that it is creating a wave of material that is deforming the inner parts of the nebula. The appearance of these structures changes so fast that astronomers can actually observe how they reshape. This provides a rare opportunity as cosmic timescales are usually much too long for change to be observed to this extent.

The data from the Wide Field Imager on the MPG/ESO 2.2-metre telescope at ESO’s La Silla Observatory in Chile used to make this image were selected from the ESO archive by Manu Mejias as part of the Hidden Treasures competition.