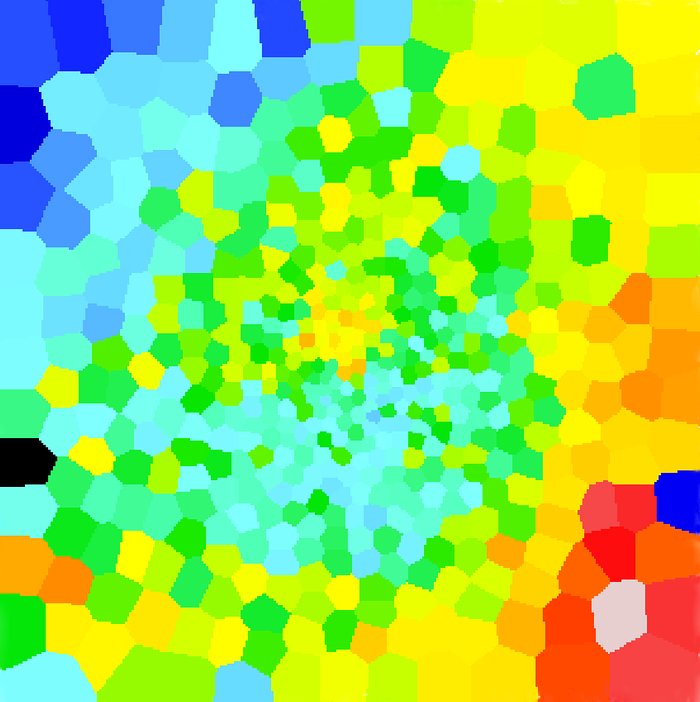 This colourful picture resembles an abstract painting, or perhaps a contemporary stained-glass window. But it is actually an unusual view of a galaxy taken with the new MUSE instrument on ESO’s Very Large Telescope.

Colours in astronomical pictures are usually related to the real colour of an object. In this image, however, the colours represent the motion of the stars that form the giant elliptical galaxy Messier 87 — one of the brightest galaxies in the Virgo Cluster which lies about 50 million light-years away.

Red in the image indicates that stars in that part of the object are, on average, moving away from us, blue means they are coming towards us, and yellow and green are in between.

This new map of Messier 87 from MUSE shows these trends more clearly than ever before. It reveals a slow rotation of this massive object — the upper left part (in blue) is coming towards us and the lower right (in red) is moving away. It also reveals some unexpected features — for example the reversal of colours at the centre of the image, with blueish in the lower part of the centre and yellow–orange in the upper part — that suggest Messier 87 may have had a more dramatic past than previously believed, and may thus be the result of the merging of several galaxies.

A paper discussing these observations was published by the team led by Eric Emsellem, ESO Head of the Office for Science, in the letters of the Monthly Notices of the Royal Astronomical Society.