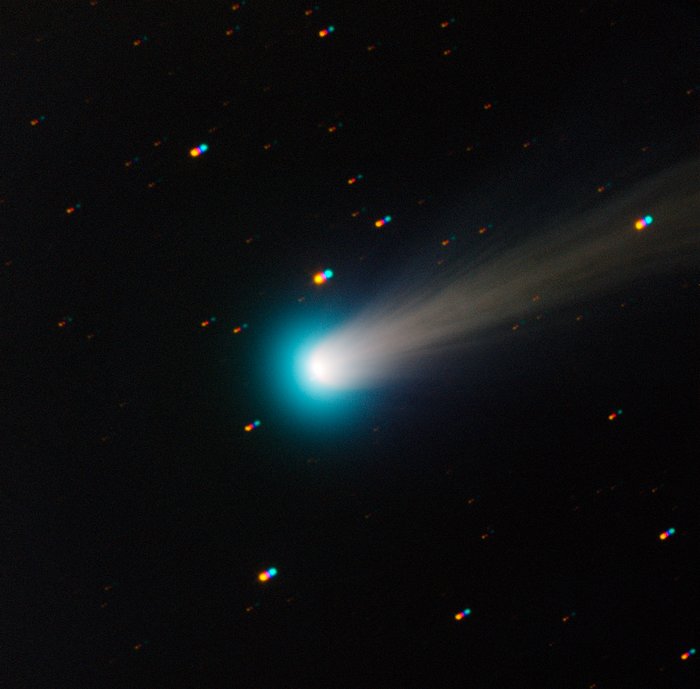 This new view of Comet C/2012 S1 (ISON) was taken with the TRAPPIST–South national telescope at ESO's La Silla Observatory on the morning of Friday 15 November 2013. Comet ISON was first spotted in our skies in September 2012, and will make its closest approach to the Sun in late November 2013.

TRAPPIST–South has been monitoring comet ISON since mid-October, using broad-band filters like those used in this image. It has also been using special narrow-band filters which isolate the emission of various gases, allowing astronomers to count how many molecules of each type are released by the comet.

Comet ISON was fairly quiet until 1 November 2013, when a first outburst doubled the amount of gas emitted by the comet. On 13 November, just before this image was taken, a second giant outburst shook the comet, increasing its activity by a factor of ten. It is now bright enough to be seen with a good pair of binoculars from a dark site, in the morning skies towards the East. Over the past couple of nights, the comet has stabilised at its new level of activity.

These outbursts were caused by the intense heat of the Sun reaching ice in the tiny nucleus of the comet as it zooms toward the Sun, causing the ice to sublimate and throwing large amounts of dust and gas into space. By the time ISON makes its closest approach to the Sun on 28 November (at only 1.2 million kilometres from its surface — just a little less than the diameter of the Sun!), the heat will cause even more ice to sublimate. However, it could also break the whole nucleus down into small fragments, which would completely evaporate by the time the comet moves away from the Sun's intense heat. If ISON survives its passage near the Sun, it could then become spectacularly bright in the morning sky.

The image is a composite of four different 30-second exposures through blue, green, red, and near-infrared filters. As the comet moved in front of the background stars, these appear as multiple coloured dots.

TRAPPIST–South (TRAnsiting Planets and PlanetesImals Small Telescope–South) is devoted to the study of planetary systems through two approaches: the detection and characterisation of planets located outside the Solar System (exoplanets), and the study of comets orbiting around the Sun. The 60-cm national telescope is operated from a control room in Liège, Belgium, 12 000 km away.