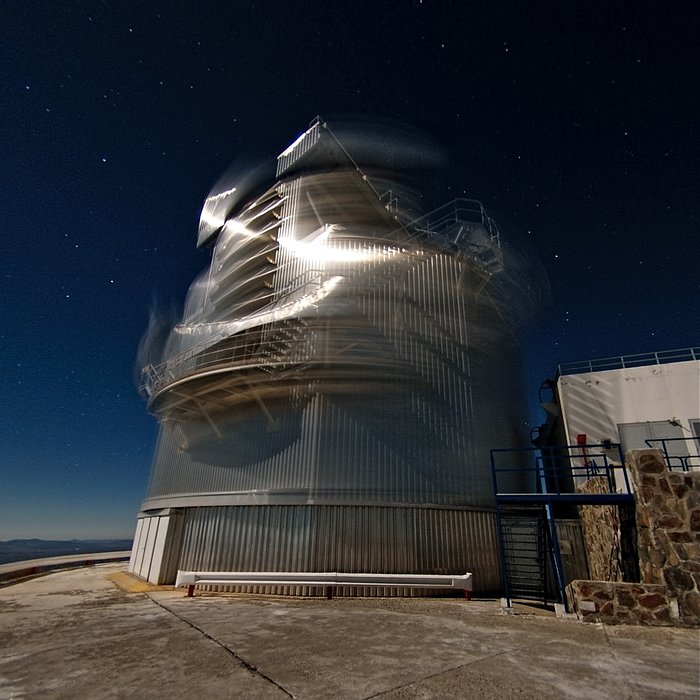 This dynamic image shows the New Technology Telescope (NTT) located at ESO’s La Silla Observatory in Chile. The distinctively shaped enclosure of the telescope appears blurred by movement in the picture, as the telescope rotates to point at its desired target. The photo was taken with a 30-second exposure.

One of the first things you notice in this picture is that the telescope building has a peculiar angular shape on the outside, rather than the more common rounded dome design usually seen. Its design features have been much copied, including by ESO’s Very Large Telescope, but they were groundbreaking when the telescope was inaugurated in 1989.

The NTT’s revolutionary design targets optimal image quality, for instance, through carefully controlled ventilation, which optimises airflow across the NTT, minimising the blurring caused by air turbulence inside. Just visible in the blur of this image are the large flaps that form a key part of this system.

Another feature that was advanced at the time of its construction is the NTT’s mirror. While, at 3.58 metres in diameter, it was never considered particularly large, its design was highly innovative. The mirror is flexible, and can be adjusted in real time to maintain a perfect shape, so no flexing or sagging can harm the image quality. ESO and the NTT were pioneers in using this technology, called active optics, and it is now a standard feature of modern telescopes.

Currently, the NTT has two different instruments that astronomers can use to conduct their observations: SOFI (short for the Son of ISAAC, a VLT  instrument), which is an infrared spectrograph and imaging camera, and EFOSC2, a spectrograph and camera designed to detect faint objects.

The La Silla Observatory is located in the southern part of the Atacama Desert, 600 kilometres north of Santiago de Chile and at an altitude of 2400 metres.

The image was taken by Malte Tewes, an astronomer at the Ecole Polytechnique Fédérale de Lausanne, Switzerland.

Malte submitted this photograph to the Your ESO Pictures Flickr group. The Flickr group is regularly reviewed and the best photos are selected to be featured in our popular Picture of the Week series, or in our gallery.