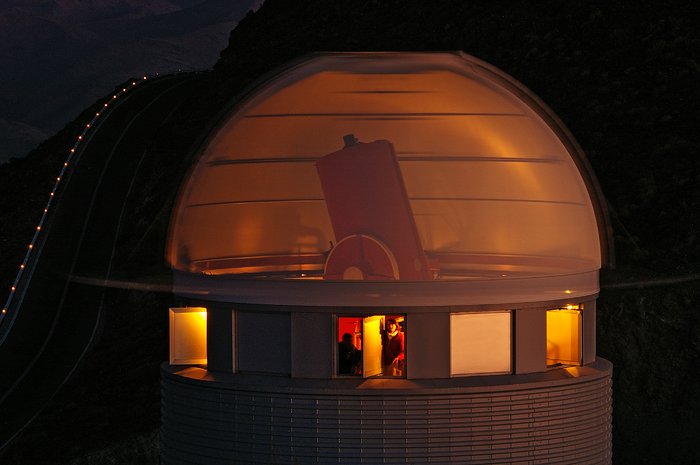 As night was falling over ESO’s La Silla Observatory in Chile on 20 December 2009, the sky was not yet dark enough for the telescopes to start observations. But conditions were perfect to perform a clever trick with the dome of the Swiss 1.2-metre Leonhard Euler Telescope: allowing us to peer inside with this photograph apparently taken through the dome.

This image is a 75-second exposure taken while the slit of the Euler telescope’s dome was performing half a rotation at full speed. Through the ghostly blur of the moving dome walls, the telescope is clearly visible. A dim light was switched on in the interior of the building especially for the purpose of this photo.

The picture was taken by Malte Tewes, a young astronomer from the École Polytechnique Fédérale de Lausanne in Switzerland, who had just finished a two-week observing run at the telescope on the evening in question. The next observer, Amaury Triaud, and the telescope’s technician, Vincent Mégevand (both pictured), were on site so they could operate the dome from the inside while Malte took the photograph from outside.

The road that leads to ESO’s nearby 3.6-metre telescope is visible lined by a chain of lights to the left of the image. In addition to the 3.6-metre telescope, the New Technology Telescope, and the MPG/ESO 2.2-metre telescope, La Silla Observatory also hosts several national and project telescopes that are not operated by ESO. The Euler telescope, named after the famous Swiss mathematician Leonhard Euler, is one of them.