Stars dancing above the VLT 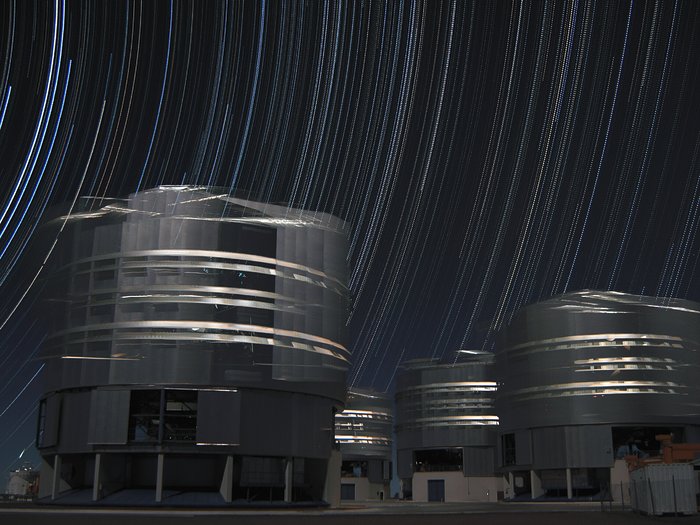 The night sky above the 2600-metre-high Cerro Paranal in the Atacama Desert in Chile is dark and clear. So clear, that very long sequences of photos can easily be taken without a single cloud obscuring the stars as they rotate around the southern celestial pole.

The site is home to ESO’s Very Large Telescope (VLT) array. Its four 8.2-metre Unit Telescopes dominate this image made by Farid Char, a student at Chile’s Universidad Católica del Norte. One of the smaller Auxiliary Telescopes is also visible, hiding in the background in the bottom left corner.

But the star of the show is the striking starry sky. Made by combining 450 exposures of 20 seconds each, the image captures the apparent stellar movement during two and a half hours. This movement, signalled by dotted trails, is illusory: the Earth, and not the stars, is rotating as time goes by.

The sequence has also captured the Unit Telescopes as they observe different objects in the night sky over the hours, transforming their precise motions into a seemingly frenetic blur of activity. What’s more, one of the exposures has even caught a shooting star, seen as a small trail above the Auxiliary Telescope in the bottom left of the image.