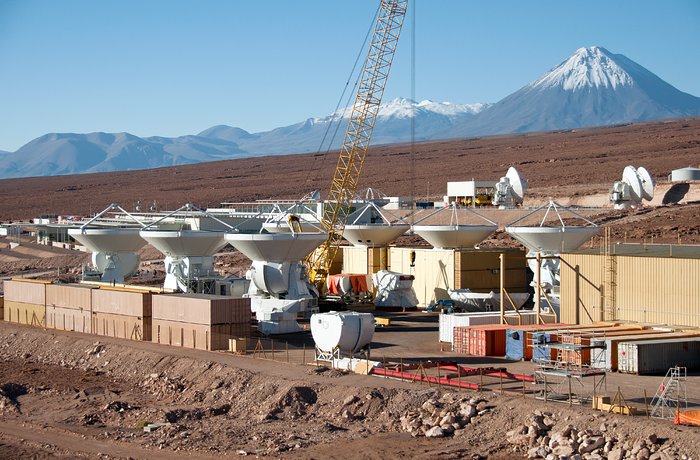 This is a helicopter view of the Atacama Large Millimeter/submillimeter Array (ALMA) Operations Support Facility (OSF) site. In the foreground is the AEM Consortium’s [1] facility where the European antennas are assembled and tested. Seven of the 25 European antennas can be seen, pointing towards the sky. More parts, including a receiver cabin and antenna base, await the next assembly. Each antenna has a dish 12 metres in diameter, and weighs about 95 tonnes.

Once an antenna is assembled and ready, it is handed over to the ALMA project and moved to the nearby OSF technical area, which is the area in the background, where more antennas can be seen. Here, it is integrated into the rest of the observatory’s systems. Finally, after further tests by the ALMA team, it is moved from the 2900 metres high OSF to its workplace, the Array Operation Site (AOS), located at an altitude of 5000 metres on the Chajnantor Plateau.

Also in the background, the two bright yellow ALMA antenna transporter vehicles, which are responsible for moving the antennas around and between the OSF and AOS sites, can be seen in their parking area. Further in the distance are the majestic snow-covered peaks of the high Andes, with the distinctive conical shape of the 5920-metre Licancabur volcano on the right.

ALMA, an international astronomy facility, is a partnership of Europe, North America and East Asia in cooperation with the Republic of Chile. ESO, the European partner in ALMA, is providing 25 12-metre antennas through a contract with the European AEM Consortium. ALMA will also have 25 North American antennas, and 16 East Asian antennas.