Reflecting on the VLT 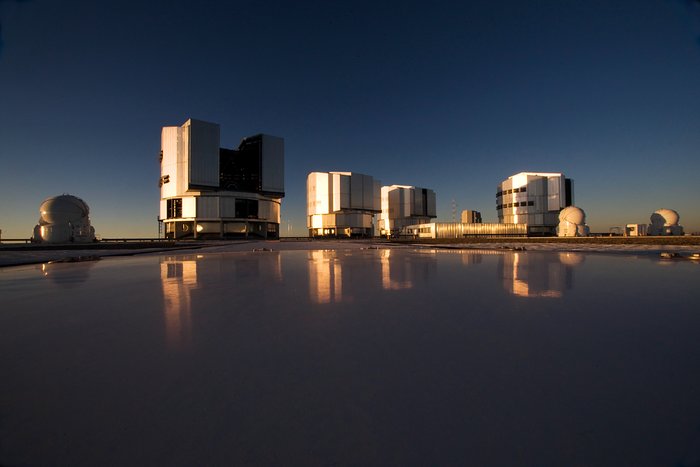 The Sun sets at ESO’s Very Large Telescope (VLT) in this image. Taken at the observatory on Cerro Paranal in the dry Atacama Desert of Chile, the observatory’s four 8.2-metre telescopes can be seen preparing for the night ahead. Three of the VLT’s four Auxiliary 1.8-metre Telescopes (AT), used for interferometry, are also visible. The telescopes are seen reflected in the protection cover of one of the AT stations. The ATs are mounted on tracks and can be moved between precisely defined observing positions from where the beams of collected light are combined in the interferometric laboratory. The ATs are very unusual telescopes, as they are self-contained in their own ultra-compact protective domes, and travel with their own electronics, ventilation, hydraulics and cooling systems. Each AT has a transporter that lifts the telescope and moves it from one position to the other. At 2600 metres above sea level, the observing climate is excellent, with little disturbance from clouds.