A European ALMA antenna takes a ride on a transporter 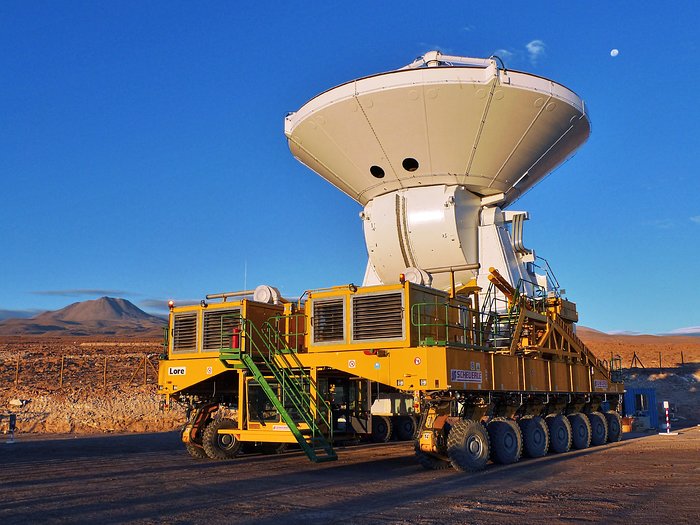 A European Atacama Large Millimeter/submillimeter Array (ALMA) antenna takes a ride on Lore, one of the ALMA Transporters, at the 2900-metre altitude Operations Support Facility in the Chilean Andes. This took place on 23 June 2010, and was the first time that European antennas have been lifted with the transporters, a procedure that was fully successful, with both moves completed in a single day.

The first two European antennas for ALMA have been moved to two new outdoor foundation pads in order to perform tests of their dish surface accuracy. In this process, known as holography, the antennas observe the signals from a special transmitter located on a nearby tower. In order to allow parallel assembly of several antennas, two new foundations have recently been built. As the newly built foundations lie between the original positions of the two antennas and the holography tower, the antennas were moved to the new locations.

The European ALMA antennas are provided by ESO, through a contract with the AEM Consortium (Thales Alenia Space, European Industrial Engineering, and MT-Aerospace). The ALMA antenna transporters are also provided by ESO, and manufactured by the company Scheuerle Fahrzeugfabrik GmbH. ALMA, an international astronomy facility, is a partnership of Europe, North America and East Asia in cooperation with the Republic of Chile.