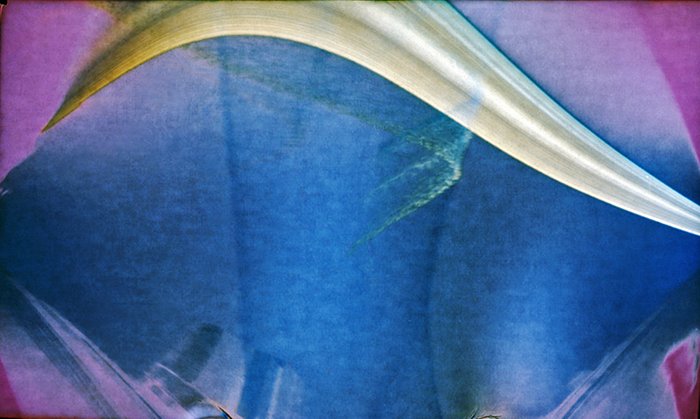 Solargraphy, the art of using a single long-term exposure with a pinhole camera to photograph the movement of the Sun over the course of many weeks, helps show just why Cerro Paranal in northern Chile makes the perfect home for ESO’s Very Large Telescope (VLT). The pinhole camera, made from a small film canister and a piece of photographic paper, was placed on the roof of the VLT control building by Gerd Hüdepohl from 15 October to 26 December 2009, covering spring in the southern hemisphere. The white streaks across the top of the image are the Sun’s progress across the sky over the whole period. When clouds come between the Sun and the camera, breaks in the streak form but, as can be seen here, no clouds obscured the sky during the entire exposure. Perfect astronomy weather in other words! The VLT’s Unit Telescope 1 is visible as a ghostly outline at the bottom of the picture.

The idea for creating the solargraphs at ESO’s telescopes came from Bob Fosbury, an astronomer based at ESO headquarters in Germany, after learning about the technique from Finnish artist Tarja Trygg. Trygg provided cameras — basically cylinders with a hole and a piece of unexposed photographic paper mounted along the inner wall — and Fosbury had Observatory director Andreas Kaufer deliver the cameras, known as “cans”, to ESO’s observatory sites in Chile and then collect them four months later for final processing by Trygg. “It’s an absolutely unique image,” Fosbury says. “I’ve never seen unbroken solar trails like this before in images exposed from all around the world.”

The colours appearing in this pinhole camera picture are not related to the actual colours of the scene. The colour comes from the appearance of finely divided metallic silver growing on silver halide grains. With solargraphic images, the photographic paper is not developed but simply scanned with a normal colour scanner after exposure and then “inverted” — switched from negative to positive — in the computer. This reveals the latent image, which in a normal photograph consists of around ten silver atoms per billion atoms of silver halide grain and is usually invisible. On continued exposure however, the latent image clumps grow so that the first visible signs of an image are yellowish, which then darkens to sepia and finally to a maroonish-brown hue as the particle size increases. Eventually the maximum exposure produces a slate grey shade.

In this solargraph you can see curved reflections of the solar image forming a “caustic” about one third of the way across the image. Such effects are common in solargraphs when the Sun is near the edge of the field and are created by reflections from the white paper where the photographic paper departs from a circle and flattens near its ends.