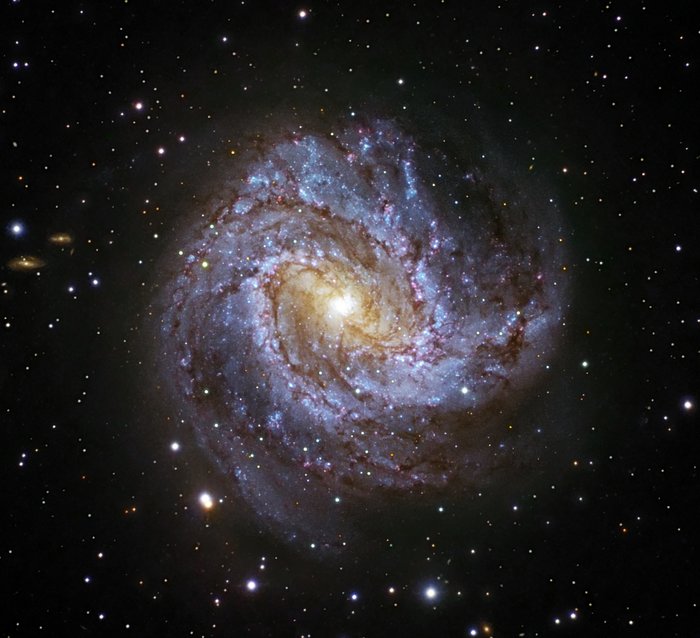 Located about 15 million light-years away towards the Hydra (the sea serpent) constellation, Messier 83 is a nearby face-on barred spiral with a classic grand design form. It is the main member of a small galactic group including NGC 5253 and about 9 dwarf galaxies. Messier 83 stretches over 40,000 light-years, making it roughly 2.5 times smaller than our own Milky Way. However, in some respects, Messier 83 is quite similar to our own galaxy. Both the Milky Way and Messier 83 possess a bar across their galactic nucleus, the dense spherical conglomeration of stars seen at the centre of the galaxies.

Messier 83 has been a prolific producer of supernovae, with six observed in the past century. This is indicative of an exceptionally high rate of star formation coinciding with its classification as a starburst galaxy. Despite its symmetric appearance, the central 1,000 light-years of the galaxy shows an unusually high level of complexity, containing both a double nucleus and a double circumnuclear starburst ring. The nature of the double nucleus is uncertain but the off centre nucleus could be a remnant core of a small galaxy that merged with Messier 83 in the past. The star clusters in the nuclear starburst rings are mostly young stars between 5 and 10 million years old. This image is based on data acquired with the 1.5-metre Danish telescope at ESO’s La Silla Observatory in Chile, through three filters (B, V, R).