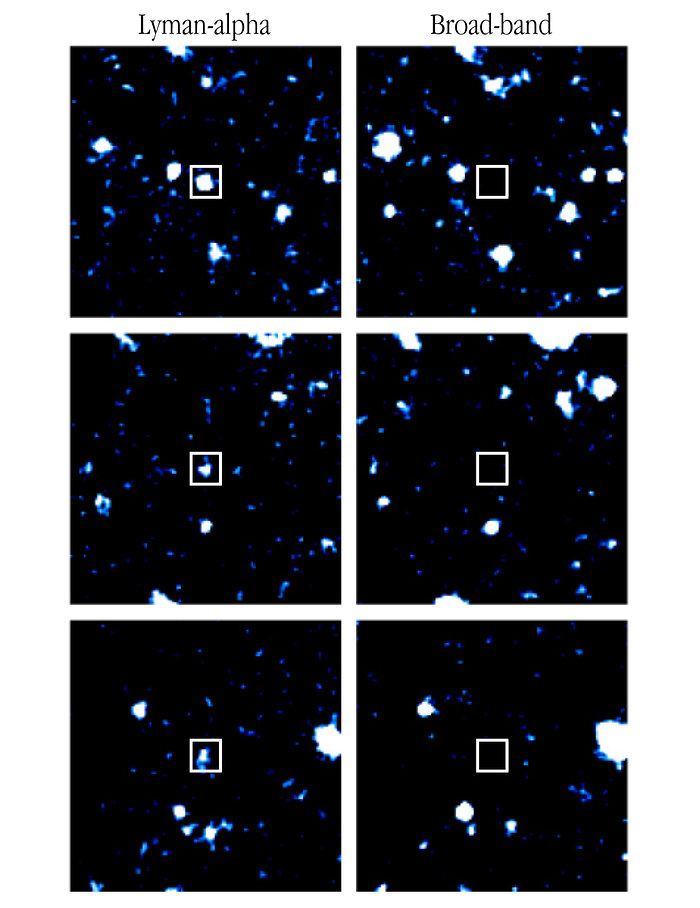 Three small fields near radio galaxy MRC 1138-262 as observed with VLT ANTU + FORS1 in a narrow-band filter at the redshifted wavelength of Lyman-alpha emission in that galaxy (left) and a broader filter in the surrounding spectral region (right), respectively. Three excellent candidates of Lyman-alpha emitters are seen at the centres of the fields. They are clearly visible in the narrow-band image (that mostly shows the gas), but are not detected in the broad-band image (that mostly shows the stars). Each field measures 24 x 24 arcsec 2, corresponding to about 620,000 x 620,000 light-years (190 x 190 kpc); North is up and East is left.

Narrow and broad-band imaging was carried out on April 12 and 13, 1999, with the ESO VLT ANTU (UT1), using the FORS1 multi-mode instrument in imaging mode. A narrow-band filter was used which has a central wavelength of 381.4 nm and a bandpass of 6.5 nm. For MRC 1138-262 (redshift z = 2.2), the emission of Lyman-alpha at 121.6 nm is redshifted to 383.8 nm, which falls in this narrow band. The broad-band filter was a Bessel-B with central wavelength of 429.0 nm. The detector was a Tektronix CCD with 2048 x 2046 pixels and an image scale of 0.20 arcsec/pixel. Eight separate 30-min exposures were taken in the narrow band and six 5-min in the broad band, shifted by about 20 arcsec with respect to each other to minimize problems due to flat-fielding and to facilitate cosmic ray removal. The average seeing was 1.0 arcsec. Image reduction was carried out by means of the IRAF reduction package. The individual images were bias subtracted and flat-fielded using twilight exposures (narrow band) or an average of the unregistered science exposures (broad-band). The images were then registered by shifting them in position by an amount determined from the location of several stars on the CCD. The registered images were co-added and dark pixels from cosmic rays were cleaned. To improve the signal-to-noise ratio, the resulting images were smoothed with a Gaussian function having full-width-at half-maximum (FWHM) = 1 arcsec (5 pixels).