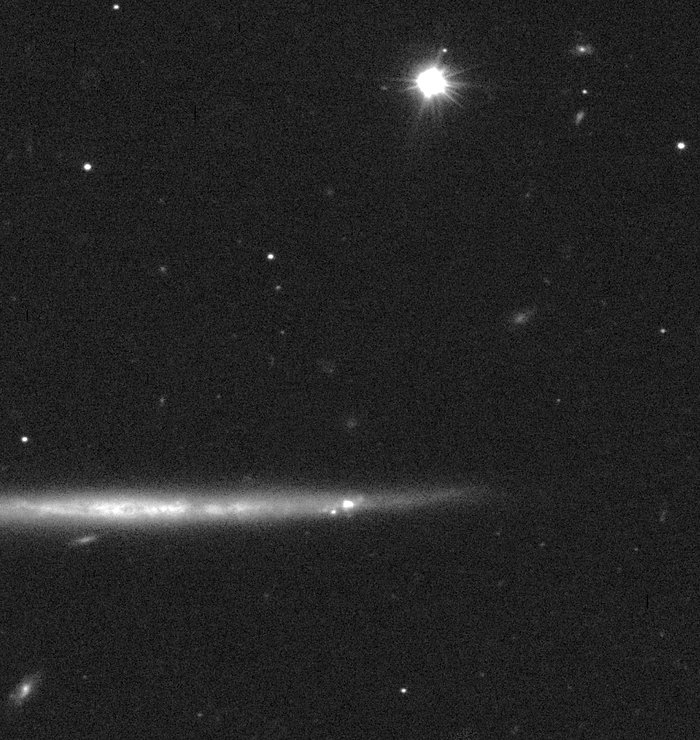 The galaxy ESO 342-G017 was observed on August 19, 1998 during a spell of excellent observing conditions. Two exposures, each lasting 120 seconds, were taken through a red filtre to produce this photo. The quality of the original images is excellent, with seeing (FWHM) of only 0.26 arcsec measured on the stars in the frame. ESO 342-G017 is an Sc-type spiral galaxy seen edge-on, and the Test Camera was rotated so that the disc of the galaxy appears horizontal in the figure. Thanks to the image quality, the photo shows much detail in the rather flat disc, including a very thin, obscuring dust band and some brighter knots, most probably star-forming regions.

This image is reproduced from a composite of two 120-second exposures in the red R-band (~600 nm) of the edge-on galaxy ESO342-G017, both with 0.26 arcsec image quality. The frames were flat-fielded and cleaned for cosmics before combination. The field shown measures 1.5 x 1.5 arcmin. North is inclined 38 o clockwise from the top, East is to the left.