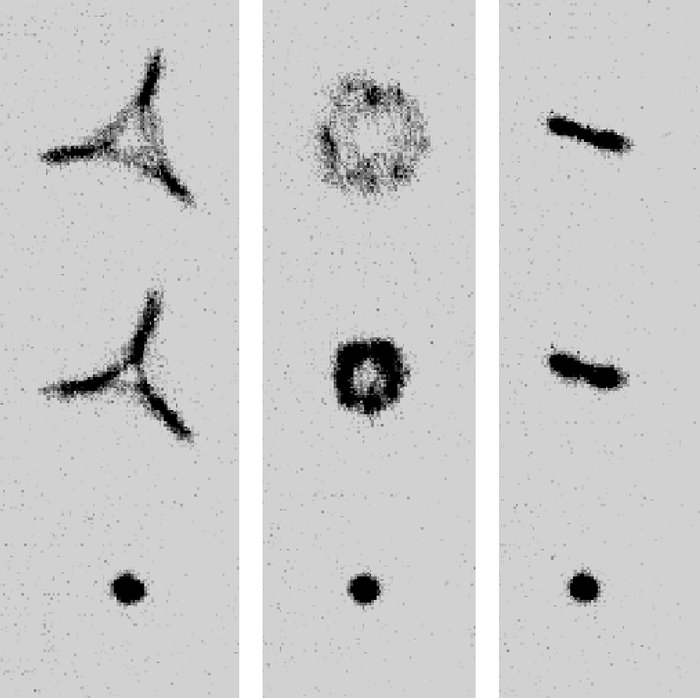 The VLT active optics system fully controls the primary and secondary mirrors. In this composite, images of stars are shown that were obtained during tests in which the control system forced the optical elements to produce three different image aberrations, namely triangular, round (defocus) and linear (astigmatism). This is done by applying different forces to each of the 150 individual active actuators on which the 8.2-m main mirror rests and to the position of the secondary mirror. In the case of the triangular aberration, the mirror was made to resemble Napoleon's hat. It is worth noting that the deviation of the mirror from its optimum shape is only 0.015 millimetres.

The great power of this system is demonstrated by the fact that the resulting stellar images can take on (nearly) any desired form. The optical system is also consistently brought back to its optimal form, producing the sharp images of a real star, shown in the lower row.

The control of the two mirrors is such that no significant aberrations remain after the corrections are applied. The accuracy of the control of shape of the primary mirror results in an average error of order 0.00005 millimetres. The telescope is only limited by the Earth's atmosphere. In space, the optical quality of the mirrors under active control could be diffraction limited.