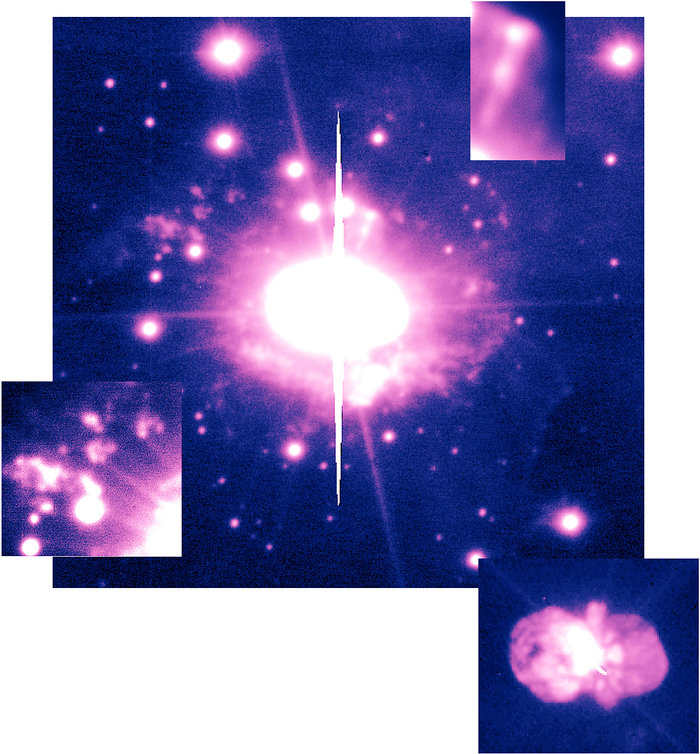 Around 1841, Eta Carinae became one of the brightest stars in the sky when it underwent a giant outburst. This 10-second image was obtained in red light on May 22, 1998, with the coated 8.2-m VLT mirror. It beautifully demonstrates the detailed structure of the material that was ejected on that occasion. While many of the individual structures that can be recognised here have been subject to previous investigations, this is the most detailed ground-based image ever obtained of this extensively studied object and its immediate surroundings.

The bright star in the center is heavily overexposed, leading to "blooming" effects in the digital detector and adding a signature of the "spiders" that hold the secondary mirror in position.

Another image was obtained with the UT1 Cassegrain Guide Probe under excellent seeing conditions (0.38 arcsec), see the insert at the bottom right corner. It shows Eta Carinae and the Homunculus nebula in great detail. The orientation of the two images is identical.

Eta Carinae is one of the heaviest stars in the Milky Way and is situated at a distance of 7,500 light-years. Its mass is estimated to be about 100 times that of the Sun. Such heavy stars burn their hydrogen at an exceptionally high rate, so that they become intrinsically very bright, about a million times more luminous than the Sun. A consequence is that they evolve much faster and explode as supernovae only a few million years after their birth.

Eta Carinae has now entered the final stage of its life and will most probably become a supernova some time during the next 100,000 years. In the present stage, it is highly unstable. It undergoes giant outbursts at least once every one thousand years during which it sheds an enormous amount of mass.

This fine image shows the remnants of Eta Carinae's most recent outburst that took place around 1841, that is, simultaneously with the dramatic brightening of the object. Moreover, at the left-hand side, several faint isolated features (known as the "East condensations") show up in great detail (see the insert at bottom left corner). They may have been ejected in the 15th century, some 400 years earlier, during an outburst similar to the one that ocurred in 1841.

The image also includes a linear, jet-like feature (insert upper right corner) that displays blobs of gas moving with velocities exceeding 1000 km/s. A bow shock at the head of the jet-like feature is clearly visible.