Light-bending matter in the distant Universe 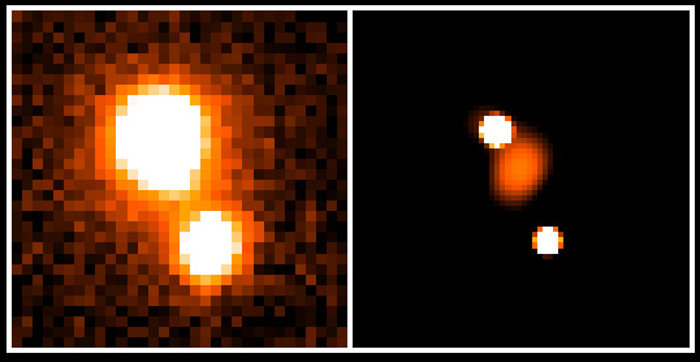 This photo shows the unusual object HE 1104-1805, a gravitational lens (`cosmic mirage') in the southern constellation of Crater (the Cup) with two images of the same quasar and also the distant galaxy responsible for this effect.

This image was obtained by combining a series of exposures made at La Silla during the night of April 14 - 15, 1997, with the ESO/MPI 2.2-m telescope and the infrared detector IRAC 2b . The total exposure time was 6480 seconds in the near-infrared J-band, where the lensing galaxy is quite faint (J = 19.0 +- 0.2), but still sufficiently above the limiting magnitude of the combined image (J = 22) to be easily measurable.

The left panel shows the result of conventional image processing of the data (with seeing of about 0.8 arcsec). Only the two quasar images may be discerned.

In the right panel, however, the images have been simultaneously treated (deconvolved) by means of new software developed for this programme, cf. http://vela.astro.ulg.ac.be/imaproc. The resulting angular resolution is now 0.27 arcsecond, i.e. approaching that of the Hubble Space Telescope (0.13 arcsec in the J-band and 0.23 arcsec in the K-band with HST + NICMOS).

Now the lensing galaxy is clearly visible between the two quasar images. It is closer to the strongest of the two (`A'; upper); this is unusual and indicates the presence of more mass in the lensing system that what is directly observable. It may therefore be that dark (invisible) matter plays an important role in this gravitational lens.

Notes: The right image was taken using the, the left image is from HST NICMOS data.