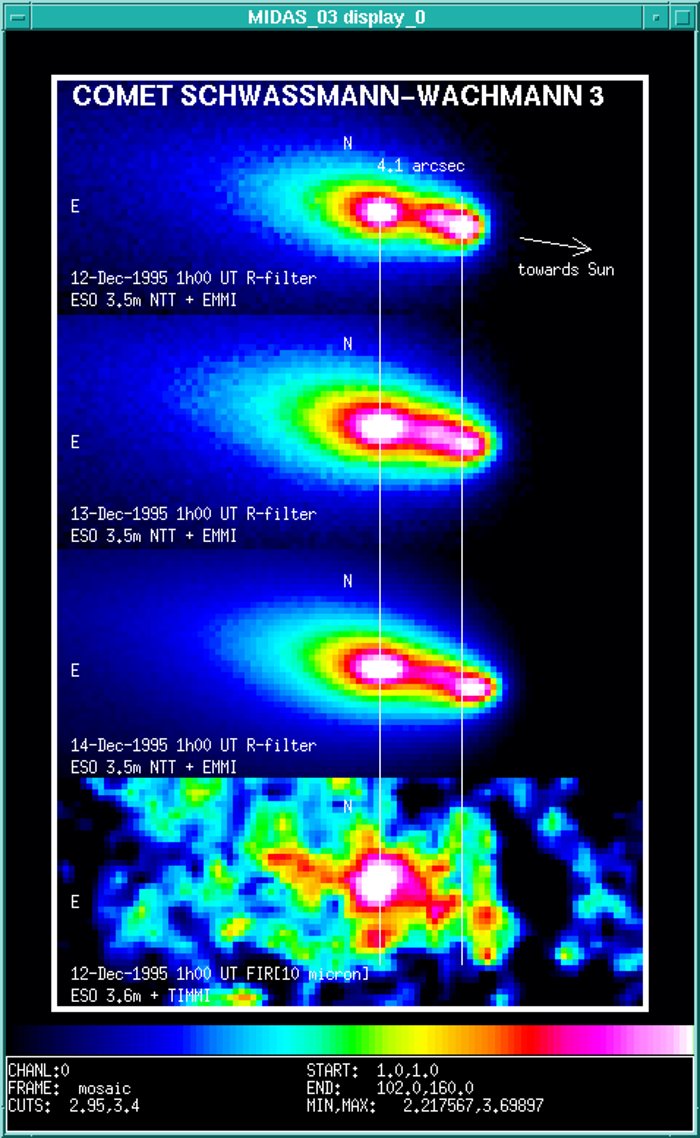 This composite of four individual exposures shows the innermost area of the extended coma of Periodic Comet Schwassmann-Wachmann 3. It demonstrates that its nucleus has recently split into three, probably four individual pieces.

The upper three images were obtained on December 12, 13 and 14, 1995, through a red filtre and with the ESO Multi-Mode Instrument (EMMI) attached to the 3.5-metre New Technology Telescope (NTT). They show the presence of three condensations around the split nuclei, nearly aligned in the direction towards the Sun. They lie in or very near the orbital plane of the comet.

A comparison of the images clearly shows that the distance between the two brightest condensations is slowly increasing and also that the brightness of the two fainter ones (in the middle and to the right) is variable. At the time of the observations, the comet was about 260 million kilometres from the Earth and the measured angular distance between the brightest condensations corresponds to a projected separation of about 5100 kilometres.

The image at the bottom was obtained on December 12, 1995, at a wavelength near 10 micron with the Thermal Infrared Multi-Mode Instrument (TIMMI) at the ESO 3.6-metre telescope. The leftmost condensation is much brighter than the others at this wavelength; this indicates a much larger amount of dust. It is therefore likely that this condensation represents the denser dust cloud around the largest nucleus, and that the (smaller) pieces in the other condensations broke off from this one. On this image, there is a fainter, fourth condensation about 2 arcseconds directly south of the brightest one. The other features are quite faint and may not be real.

This is eso9601b, which accompanies eso9601. This photo is available in GIF format on the World-Wide Web in a B/W (01/96-BW) as well as in a false-colour (01/96-COL) version. It may be reproduced, if credit is given to the European Southern Observatory.

Notes: The top three images are from the New Technology Telescope (NTT) and the bottom is from the ESO 3.6-metre telescope.