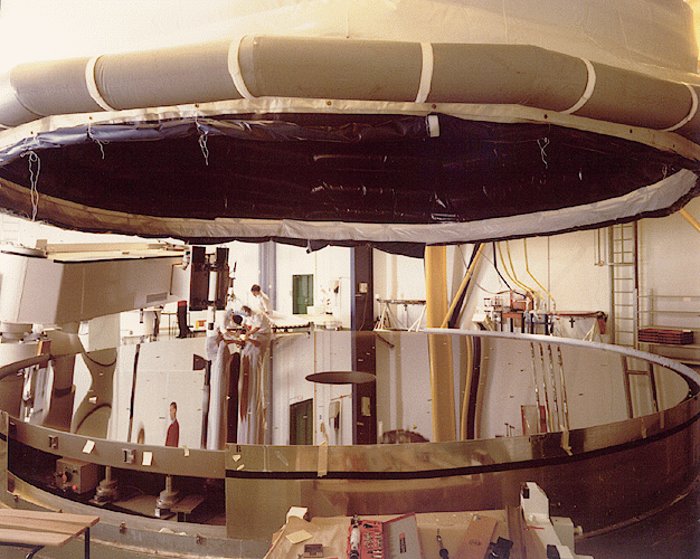 This photo of the first 8.2-metre astronomical mirror for the ESO Very Large Telescope (VLT) was obtained in early November 1995, at the REOSC factory in Saint Pierre du Perray (France). It shows the giant mirror undergoing the final acceptance tests by ESO, following a two-year polishing phase at REOSC during which it received the desired, incredibly precise figure. Three more mirrors of this size will follow during the next years.

The VLT mirror blanks were made of the temperature-insensitive Zerodur material by Schott Glaswerke AG in Mainz (Germany). From here they were transported to the REOSC workshop near Paris by ship. This new facility, unique in the world, was specifically conceived, built and equipped to polish and test the large VLT mirrors. It is equipped with two machines: one for grinding, the other for polishing, and both with a 150 actuator system in order to support the thin and flexible, 23.5 tons mirrors.

Each mirror has a surface of more than 50 square metres and the measurements have shown that the final optical surface is correct to within 0.00005 millimetres. For illustration, this corresponds to an accuracy of only 1 millimetre deviation over a surface with a diameter of 165 kilometres (equivalent to the entire Paris area)!

The first mirror has now been placed in its transport box. It will be moved to the site of the VLT Observatory at Paranal in Chile, when the assembly of the mechanical parts of the first VLT telescope has been completed in early 1997.