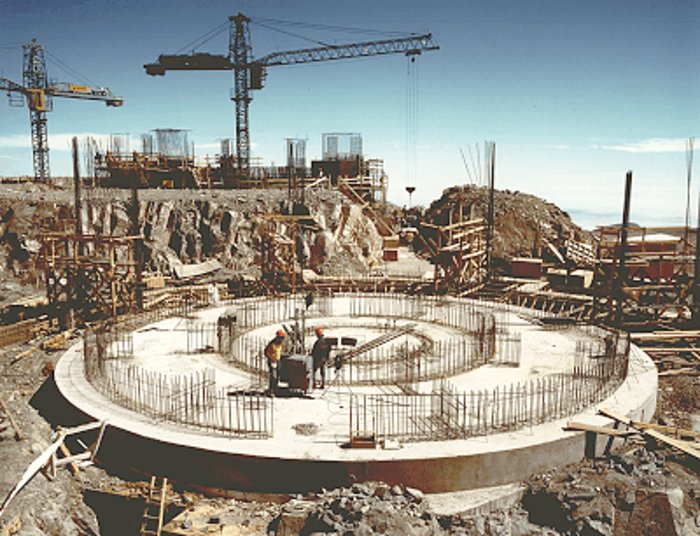 This photo was obtained in mid-September 1994 and shows the work at Cerro Paranal on the foundations for VLT Unit Telescopes no. 1 (background) and 2 (foreground).

The round concrete slab in the front will serve as baseplate on which to build vertical pillars for two circular railway tracks, 9 and 18 metres in diameter, that the rotating 8.2-metre telescope structure will rest on. Around this an outer concrete structure will soon be constructed which will support the telescope enclosure. The two structures will be completely independent, thus ensuring that no vibrations from the activities in the enclosure can be transmitted to the telescope.

The foundations for Unit Telescope no. 1 in the background have advanced further. The final height of the outer structure is indicated by the steel bars. The enclosure now being shipped from Europe will be placed on top of this structure. With a diameter of 35 metres and a total height of almost 40 metres, it will be a most impressive sight when it is ready in May 1995.

The connecting tunnel between the two domes is visible to the right of the centre. The concrete work is about to begin and once the passage is ready, it will be completely buried under the surface. In fact, finally only the four domes will be visible on the top of Paranal; this will ensure the best possible wind flow over the platform and thus reduce wind turbulence that could adversely influence astronomical observations.