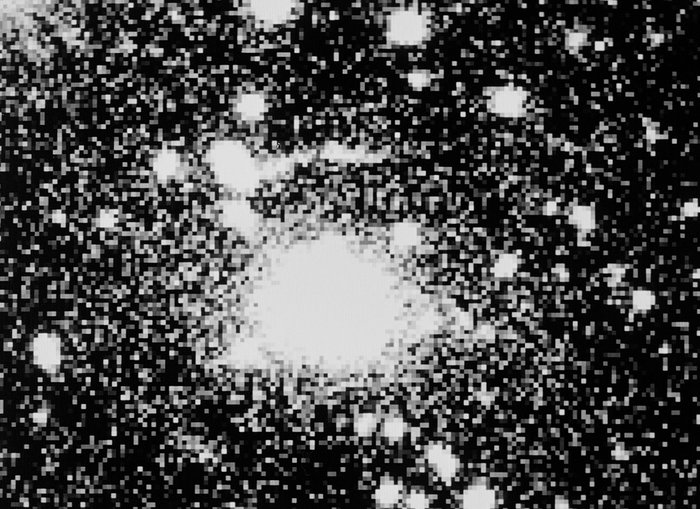 This image shows the compact cluster of galaxies EMSS 2137--23 and the "giant arc", just north of the centre of the cluster. It was obtained in June 1992 with the ESO 3.5-m New Technology Telescope (NTT) and the ESO Multi-Mode Instrument (EMMI) during remote observations from the Trieste Astronomical Observatory. The observers were Massimo Ramella and Mario Nonino of the Trieste Observatory.  The measured redshift of EMSS 2137--23 is 0.32, corresponding to a radial velocity of ~ 80,000 km/sec and a distance of about 5,000 million light-years.

The 15-arcsec long arc consists of at least two parts and is a "gravitational lens" effect, that is the distorted and amplified image of a galaxy situated behind the cluster at an even larger distance. The arc is well visible north of (above) the combined image of several galaxies, here overexposed in order to bring out the relatively faint image of the arc (total magnitude R = 21.5).  Many of the other objects seen on the photo are galaxies in the cluster, but some are foreground stars in the Milky Way.