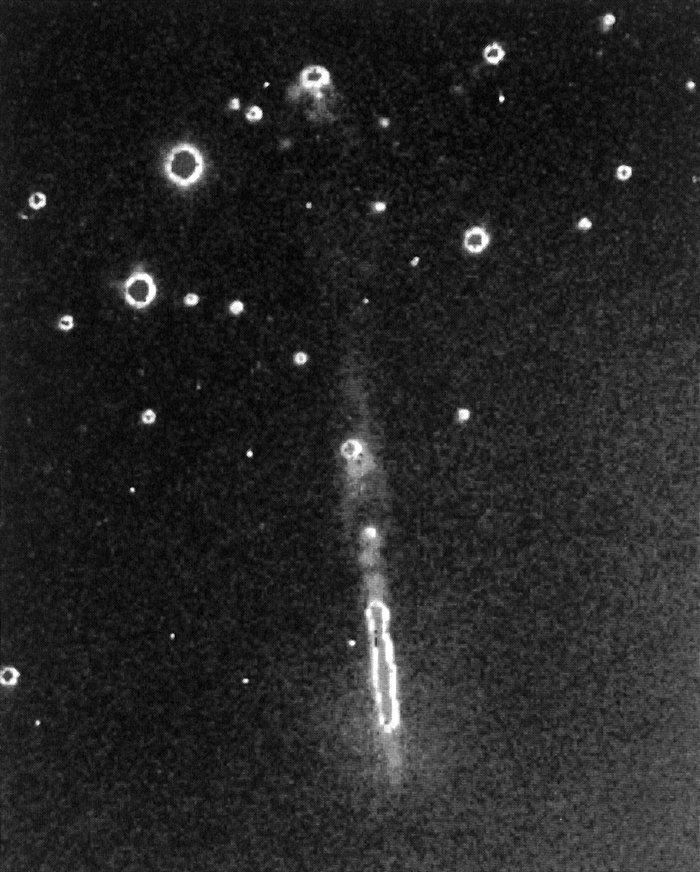 This photo shows the newly discovered large jet in the HH-111 complex.

The straight jet emerges from the surrounding interstellar cloud in the lower part of the picture. The outline of the cloud is vaguely visible by the brighter background near the right edge of the picture.

Also seen is a diffuse reflection nebula around the lower part of the jet. This nebula is illuminated by the light from the newborn star, hidden deep within the cloud. Because of the heavy obscuration, the star itself is not visible on this photo.

The jet produces a ``bow-shock'' nebula; this is the bright, mushroom-shaped nebula in the upper part of the picture. The round points are background stars in the Milky Way.

Compare this image with the graphic representation of the jet isophotes, also accompanying this Press Release.

The picture was produced as a composite of four 1 hour CCD exposures, obtained with the Danish 1.5 m telescope at La Silla through a narrow optical filter. The light seen here from the jet is emitted by singly ionised sulphur atoms.

This photo is available in a B/W and a false-colour version. (ESO Press Release eso8906; BW and Colour)