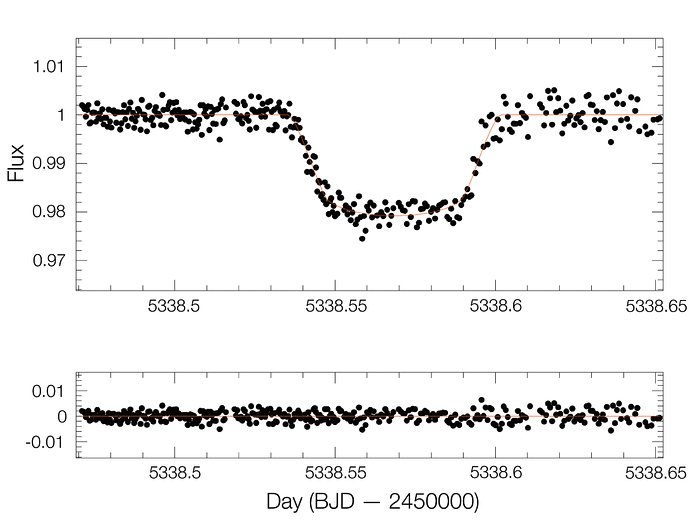 The first light curve of an exoplanet passing in front of its star (upper panel), as obtained by TRAPPIST–South (TRAnsiting Planets and PlanetesImals Small Telescope–South), a newly installed telescope at La Silla. TRAPPIST–South will detect and characterise exoplanets by making high precision measurements of “brightness dips” that might possibly be caused by exoplanet transits. During such a transit, the observed brightness of the star decreases slightly because the planet blocks out part of the starlight. The larger the planet, the more of the light is blocked and the more the brightness of the star will decrease. The figure shows the dip as observed on 21 May 2010, when the — already known — planet around the solar-like star WASP-19 passed in front of it. The planet is slightly more massive than Jupiter, but much larger. It is so bloated because of its proximity to its host star, its orbital period being only 19 hours (compared tomore than 11 years for Jupiter around the Sun), and is an extreme example of a “hot Jupiter”.

The 60-cm national telescope is operated from a control room in Liège, Belgium, 12 000 km away.

The lower panel shows the residuals between the observations and the fit (red line).