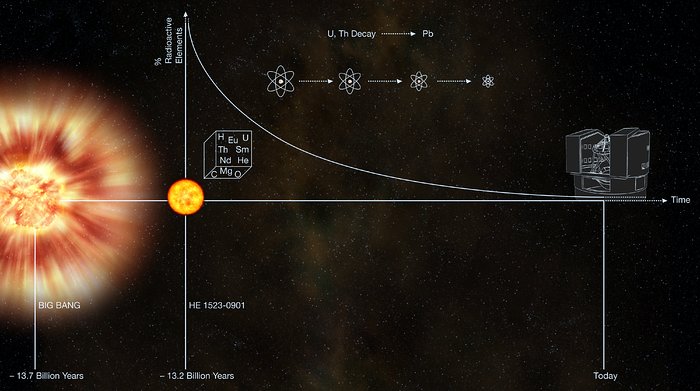 Recent cosmological studies show that the Big Bang occurred 13.7 billion years ago. The metal-poor star HE 1523 formed in our Milky Way galaxy soon afterward, cosmologically speaking : 13.2 billion years ago. The primitive star contained the radioactive heavy elements uranium and thorium, and the amounts of those elements decay over time, each according to its own half-life. Today, astronomer Anna Frebel of the University of Texas at Austin McDonald Observatory and her colleagues have deduced the star's age based on the amounts of radioactive elements it contains compared to certain other "anchor" elements, specifically europium, osmium, and iridium. The study of the star's chemical make-up was made using the UVES spectrograph on the Kueyen Telescope, part of ESO's Very Large Telescope, at Paranal, in Chile.