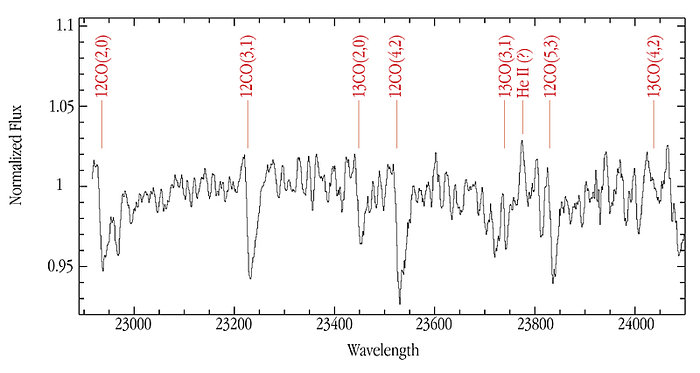 The image shows one of the infrared ISAAC spectra of GRS 1915+105 . It is a K-band spectrum (in the 2.2 µm near-infrared spectral region) that reveals several previously unnoticed spectral features from the companion star that donates matter to the black hole. The presence and characteristics of these lines indicate that this donor star is a low-mass star.  Observing how the positions of the strong carbon monoxide bands (CO) shift with time has allowed the astronomers to measure the orbital motion of the donor star.

Technical information: this image, with a K-band spectrum of GRS 1915+105, was obtained with ISAAC on the 8.2-m VLT ANTU telescope at Paranal. It is a sum of five spectra where each exposure is made up of eight integrations of 250 seconds each. The total exposure time is thus 167 minutes. With a one arc second slit, the spectral resolution is about 3000.