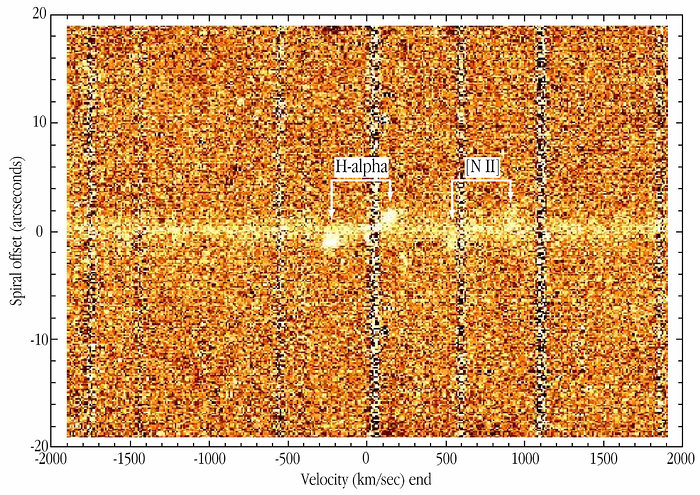 The "raw" spectrum of the distant galaxy ISOHDFS 27, obtained with the ISAAC infrared instrument at the 8.2-m VLT ANTU telescope. Light from hydrogen atoms emitted in the red spectral region (the H-alpha emission line) is visible as two prominent "blobs" on either side of the central, featureless spectrum (the galaxy "continuum"). A weaker emission line from singly ionized nitrogen ([N II]) is seen to the right; it shows exactly the same behaviour.

The present results are based on observations that were collected in visitor mode during August 18-20, 2000. For these observations, ISAAC was used in medium resolution mode (R ~ 5000) with a slit of 0.6 arcsec x 2 arcmin. The pixel scale is 0.146 arcsec/pix. The wavelength for the H-alpha is 1.0370 µm and the SZ band was used for the observations. The seeing was very good throughout the run (from 0.2 - 0.9 arcsec). The spectrum was acquired under 0.2 arcsec seeing.