The ESO Supernova Planetarium & Visitor Centre, in collaboration with the Haus der Astronomie, Heidelberg, is organising a one day workshop on Kepler’s Laws for secondary school teachers, on Friday 1 July 2016. German speaking teachers from any of the ESO Member States are welcome to attend.

The aim of the workshop is to show how important Kepler’s Laws are to modern astronomy. In particular, Kepler’s Third Law allows scientists to estimate the masses of supermassive black holes and of planets orbiting other stars, while deviations from Kepler’s laws exhibited by galaxy rotation curves led to the discovery of dark matter. Through a combination of short introductory talks and interactive workshops, participating teachers will be provided with educational materials they can use directly in the classroom.

The ESO Supernova Planetarium & Visitor Centre is currently under construction and as such, the training session will be held at ESO Headquarters in Garching bei München and will be in German. The full programme for the workshop can be found here.

To register your interest in the workshop, please fill in this form [1]. Registration closes on 30 May 2016.

[1] For Bavarian teachers: this workshop is a Fortbildung in bayerischen Schulen (FIBS) workshop. Details of the FIBS registration will be sent to you after you have registered on our website.

The ESO Supernova Planetarium & Visitor Centre is a cutting-edge astronomy centre located at the site of ESO Headquarters in Garching bei München, providing you with an immersive experience that will leave you in awe of the Universe we live in. From 2017 the centre will provide school classes and families with an unforgettable learning experience, where even the most abstract and distant topics in astronomy and physics are explained and visualised in an innovative way.

The ESO Supernova Planetarium & Visitor Centre is made possible by a cooperation between the European Southern Observatory (ESO) and the Heidelberg Institute for Theoretical Studies (HITS). The building is a donation from the Klaus Tschira Stiftung (KTS), a German foundation, and ESO will run the facility.

The Klaus Tschira Stiftung (KTS) was created in 1995 by the physicist and SAP-cofounder Klaus Tschira. It is one of Europe’s largest privately funded non-profit foundations. The Foundation promotes the advancement of the natural sciences, mathematics, and computer science, and strives to raise appreciation for these fields. The Foundation’s commitment begins in kindergarten and is pursued in schools, universities, and research facilities. The Foundation champions new methods of scientific knowledge transfer, and supports both development and intelligible presentation of research findings. The ESO Supernova is a donation from the KTS, and ESO will run the facility.

The Heidelberg Institute for Theoretical Studies (HITS gGmbH) was established by SAP co-founder Klaus Tschira and his foundation, the Klaus Tschira Stiftung, as a private, non-profit research institute. HITS conducts basic research involving the processing, structuring and analysis of large amounts of data in the natural sciences, mathematics and computer science. The research topics range from molecular biology to astrophysics.

Haus der Astronomie (HdA), literally "House of Astronomy", is a unique Centre for Astronomy Education and Outreach in Heidelberg, Germany. Our mission: To demonstrate to the public in general, and to young people in particular, the fascination of astronomy, and to further the communication between astronomers and their colleagues in other scientific disciplines.

Haus der Astronomie was founded in late 2008 by the Max Planck Society e.V. for the Advancement of Science (Germany's leading organization for basic research) and the Klaus Tschira Stiftung gGmbH. Additional partners are Heidelberg University and the City of Heidelberg. HdA moved into its current custom-built, spiral-galaxy-shaped building in late 2011. The building was donated by the Klaus Tschira Stiftung. 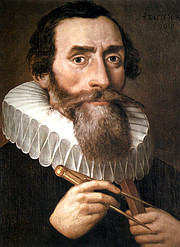 PR Image ann16022a
Johannes Kepler
Send us your comments!
Subscribe to receive news from ESO in your language
Accelerated by CDN77
Terms & Conditions