Planetarium show lovers have an exciting adventure to embark on: the search for water in the Universe. In early October “Water: a cosmic adventure” will be released — a 30-minute planetarium show that follows astrophysicist Eva Luna as she explores the turbulent origins of the vital molecule. The show was created by the Association des Planétariums de Langue Française (APLF) in collaboration with Hamburg Planetarium and ESO.

Realistic 3D animations and breathtaking footage will take you on a fascinating journey to the driest place on Earth, the Atacama Desert in Chile, where ESO’s ground-breaking telescopes search for planets that contain the essential molecule for life.

Released during its 50th anniversary year, the show highlights ESO’s greatest achievements while presenting some of the most spectacular images of the La Silla Observatory, the Very Large Telescope at Paranal and never before seen 3D models of the biggest eye on the sky — the planned European Extremely Large Telescope.

Watch the trailer here in English and here in French.

Produced by The Master Film Society, the show is available in English, French and German. The soundtrack has been recorded in digital 5.1 surround sound and the 3D-360° images were captured using the state-of-the-art RED-EPIC © 5K camera.

Interested planetariums can request one of the two formats available:

The full show will also be made available in Stereoscopic 3D and it will have a set of add-on modules of 10 minutes each, allowing post-show live interaction with the audience. The planned modules include topics such as: the European Extremely Large Telescope, water on Mars, water on Earth, the Drake equation and exoplanets. Updates on scientific issues presented during the show will be made available after September 2012 (only in fulldome format).

To learn more about the show, and to find out about presenting it at your planetarium, please check this PDF brochure (1.7 MB) or contact the Association of French-language planetariums (APLF) directly at agnes.acker@astro.unistra.fr.

Water: a cosmic adventure is APLF’s third collaboration with ESO after In Search of our Comic Origins (2009, 65 Planetariums across the world) and Mysteries of the Southern Sky (for ESO’s 40th anniversary, 2002, 40 planetariums). 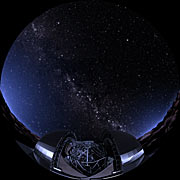 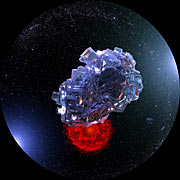 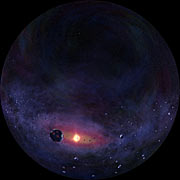 PR Image ann12064c
Artist's impression of an exoplanet
Send us your comments!
Subscribe to receive news from ESO in your language
Accelerated by CDN77
Terms & Conditions