Hot Off the Press: Issue 10 of CAPjournal

A new issue of the peer-reviewed journal for science communicators, Communicating Astronomy with the Public journal (CAPjournal), is now available.

Articles include an overview of how Disney Television Italy worked alongside the Education and Public Outreach office of the INAF Astronomical Observatory of Padua in Italy to help promote astronomy to children. The authors discuss the differences between the working practices of an entertainment company and an astronomical observatory, and how these were overcome to form a successful partnership.

This issue also tackles some difficult topics in science communication, such as the problems encountered when explaining complex scientific theories to a general audience and the misperceptions that can arise as a result, and how well the public interprets astronomical images.

Also in this issue, how new and existing tools can be used by science communicators, including a look at the Virtual Observatory, which is an international project that provides an infrastructure for sharing vast amounts of astronomical data online. And how microblogging sites such as Twitter can be much more than a means of communicating science to the public — they can also be tools to engage people in research and spacecraft missions. 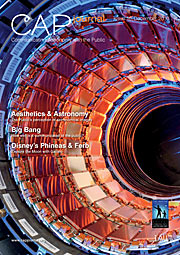 PR Image ann11001a
Cover of CAPjournal issue 10
Send us your comments!
Subscribe to receive news from ESO in your language
Accelerated by CDN77
Terms & Conditions